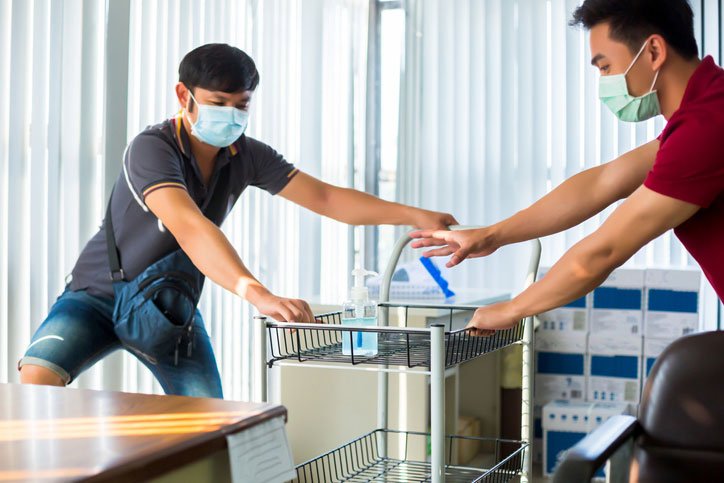 When future generations look back at the period of human history defined by the COVID-19 pandemic, we have no idea what they will be thinking. Will they admire the way we cleverly adapted and in many ways rose to the occasion during dark times? Or will they shake their heads at our stupidity and the long-term fallout that resulted from it? It all depends on how we end up dealing with the catastrophe.

But there is one thing we can be sure of: the images they will see as they watch it play out in some VR holodeck documentary will include grocery store aisles with empty toilet paper shelves accompanied by a snarky quip about the priorities of the day.

Toilet paper hoarding may be everyone’s favorite dark joke about the world’s immediate reaction to the outbreak, but it also raises a question for inquiring behavioral analysts – why toilet paper?

Something similar happens on a smaller localized scale ahead of major weather events. Like clockwork, milk, bread, and toilet paper fly off the shelves whenever a hurricane or snow storm is inbound.

But the major event right now is COVID-19, and it’s everywhere.

That means TP hoarding has gone global: early in the outbreak, the Washington Post reported that a cafe in Australia began accepting TP as currency, while thieves in Hong Kong heisted not gold, nor jewels, nor convertible bearer bonds… but a cool 600 rolls of Grade A bog roll.

Toilet paper has really only been a thing for a little over a hundred years. Humans have found other solutions throughout most of history, and the same thing is happening now, and it’s creating some nasty downstream effects: the New York Times reports that consumers seeking alternatives have been clogging up sewer systems with everything from flushable wipes (spoiler: not actually flushable) to paper towels… Brawny isn’t just an awkward hygienic product on the delicate bits, but also a bit too muscular for modern plumbing, it turns out. 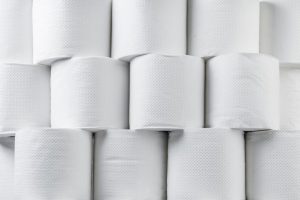 The actual reasons behind the shortages turn out to be a fascinating combination of the complicated, but highly efficient, nature of modern supply chains and manufacturing processes and the pile-on effects of panicky consumers.

It turns out there are perfectly legitimate reasons to expect household toilet paper stocks to drop during stay-at-home restrictions… folks are just around the house more than normal, and answering nature’s call there more often than they might otherwise.

Of course, the overall manufacturing capacity for toilet paper in the U.S. is perfectly capable of meeting all the wiping needs the country normally has. But as it turns out, supply and manufacturing chains for consumer versus workplace TP are almost entirely bifurcated. Naturally, your first choice isn’t one of those big industrial-sized rolls of rough-cut stuff from the office, and even if it were, the simple logistics behind trying to get those rolls into your local Safeway so you could actually buy them are all but impossible.

Moreover, the demand is usually pretty predictable on both sides, so there is not enough slack in the system to allow manufacturers to convert industrial production to make the consumer-size roles you’re used to.

So it’s entirely reasonable to expect the pallets of product rolling off the trucks to be a little lighter right now – there is legitimately a higher demand for the kind of product that is available in stores for you to buy… and on top of that, we have all the behavioral factors kicking in too.

As panic-buys go, toilet paper isn’t actually a bad choice. The hoarding isn’t entirely irrational: it keeps forever, it’s relatively inexpensive, and when you need it, you really need it!

It offers a sort of behavioral coping mechanism: although it’s not going to protect anyone from COVID-19, it’s an action that people can take immediately that gives them some sense of agency and control amid all the unpredictability and uncertainty of the crisis. And, as behaviorists well know, otherwise irrelevant actions can set up real behavioral feedback. Stocking up on supplies makes people feel better when they don’t have other options, so when they need to feel better, that’s exactly what they’re going to do.

It’s also classic imitative behavior. When fire alarms go off, people don’t run for exits; they look around and see what everyone else is doing first. And then, research shows, they tend to do the same thing. FOMO (Fear Of Missing Out) has been tied to anxiety over social exclusion, and when has the public ever been more socially excluded than right now? Hopping on the TP bandwagon, however rational or irrational it may be for other reasons, is a way to be part of the trend.

So empty shelves are a trigger, saying, “Everyone else is stocking up on supplies. Maybe you should too!”

And then there’s a very real concern about scarcity. As anyone who has been to a grocery store in recent months knows, stores have genuinely been running low on everything from hand sanitizer to cold cuts. Without information about when stocks may be replenished again, no one knows when certain items will be available in the future. If you usually buy something every couple of weeks, it’s perfectly rational to want a bigger buffer in case it’s gone the next time you shop. People who cross over into hoarding territory just have a slightly longer estimate than the rest of us on how long that may be.

But in light of the news about meat shortages and store policies limiting how much shoppers are allowed to buy, can behavioral analysts, or anyone, actually say they are wrong right now?

What Can Behavioral Approaches Do About Product Shortages? 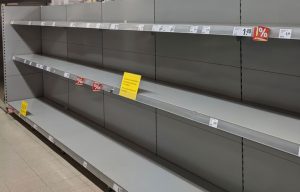 Pandemic toilet paper hoarding isn’t conventional hoarding as psychologists define it. Most folks buying in bulk don’t have OCD, or a strange attachment to inanimate objects. A common characteristic of hoarders is that they want to hang on to the stuff they like to hoard. But you can be fairly confident no one is planning to hold on to their old TP forever. In fact, in the exact opposite of a conventional hoarding reaction, you’ll probably feel some real relief when it comes time to start scaling back your TP stash.

There actually have been places running out of the products people are used to having access to, whether it’s toilet paper or filet mignon, and there’s not really anything that we as consumers can do about actual supply chain issues.

Rationing is being enforced in many stores, limiting customers to a certain number of rolls or a limited amount of meat, and that seems like the most equitable intervention and the only place where a behavioral approach can have an effect.