How are BIPs Designed for Students with ASD? 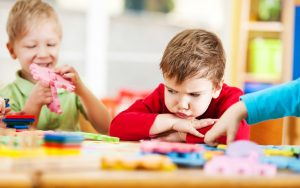 In a classroom somewhere in America today, a student with autism will become frustrated at not being able to get their teacher’s attention and shove the entire contents of their desk off onto the floor, disrupting the class.

With the normal reactionary response to something like that, the period would pretty much be shot and it would be next to impossible to get the class back on task. But with a protocol clearly outlined and an even-tempered response, the lesson is able to proceed with minimal interruption…

The teacher keeps his cool, and continues with the lecture he was giving. When he reaches a stopping point, and sets the other kids to their task, he walks nonchalantly back to the student with autism and calmly explains that, as they discussed before, she should simply raise her hand after the lecture is finished and he will always call on her then. He then asks her calmly to pick up the items on the floor… and she does.

These steps were all outlined in the student’s Behavior Intervention Plan (BIP), a set of descriptions of concrete actions and techniques to be performed with a student to help move them toward adopting certain desirable behaviors based on a professional assessment of their issues and motivations.

While a student’s Individual Education Plan (IEP) is a legally-mandated document that covers the individual educational needs and goals of each special needs student in American public schools, outlining the accommodations that will be made to ensure the least restrictive conditions are in place for the child’s learning… The BIP is the document that helps outline what steps need to be taken to make sure the student’s behavioral issues don’t stand in the way.

BIPs Are All Custom Built Around Each Student’s Behavioral Needs

There are no stock BIPs, although the forms and formats that are used may be standardized across a school system. In terms of the actual behaviors and responses, BIPs are completely customized to every individual student with autism using what is known as a Functional Behavior Assessment (FBA).

Applied behavior analysts (ABA) create an FBA after a close observation of the student and interviews with teachers, parents, and the student themselves. The ABA may review records of past behavior and medical or disciplinary records, looking for patterns and common issues.

Of course, parents have the final say on whether or not to perform an FBA and must give written authorization, but without going through the process there really is no way to establish an effective behavioral intervention plan. All the help and individualized behavioral strategies that go into working with kids on the spectrum starts with an FBA.

A legitimate BIP is all about using evidence-based interventions to deal with problem behaviors. ABAs specialize in making concrete and testable observations about behaviors in an ongoing process that involves comparing behaviors and measuring progress against an established behavioral baseline. The FBA provides everybody involved with a real understanding of that baseline.

FBAs commonly look at factors in behavioral problems that include:

Rolling Out the Behavioral Intervention Plan

With the information gathered during the FBA, the ABA can create a BIP to isolate problem behaviors, outlining the specific steps that teachers and other caregivers can take to modify problem behaviors and reinforce acceptable ones.

This might even include instructions for modifying both the environment and the consequences, in alignment with the so-called ABCs of ABA:

For example, many students with ASD have extreme environmental sensitivities to factors that wouldn’t bother neurotypical kids. A regular florescent light flickers and buzzes at minute volumes that most of us don’t notice. To a kid with sensory processing disorder, however, it might seem like being next to a lightning storm. This is an antecedent, setting up a potential for problem behaviors.

In cases where this is prompting outbursts, the BIP might specify that the student be seated as far as possible from such lighting, or even in classrooms that don’t have those lights at all.

Other environmental adjustments in a BIP may include:

But where environmental changes cannot be made to accommodate the student’s sensitivities, the BIP will outline how caregivers and teachers can respond as a way to manage — even manipulate – the consequences of the behavior.

And BIPs aren’t static. They’re designed to change and adjust based on progress or new issues that might arise. An ABA will make adjustments to the plan as behaviors change, either for better or worse. The evidence presented in the actual changes in the student’s behavior will dictate how the BIP is modified moving forward.

BIPs Address a Range of Problematic Issues Associated With ASD

BIPs can be used both to encourage desirable behaviors and to eliminate undesirable behaviors. Frequently, these are combined; a problematic behavior identified in the FBA may be present in the BIP with a consequence that both discourages that behavior while simultaneously encouraging a more desirable alternative behavior.

For example, many BIPs that address spontaneous outbursts in class recommend that the teacher refuse to acknowledge questions or comments that are made by an attention-seeking student; at the same time, the student may be gently reminded that raising their hand is the appropriate behavior for getting the teacher’s attention, and the plan will call for them to be acknowledged and praised when they perform that action.

The plans and interventions are always tailored to the specific behaviors and abilities of the student. In many cases, high-functioning students will be asked to self-monitor, or observe their own behaviors, and work on performing interventions that may not even require the active participation of a teacher or parent. Their instructions for how to cope with impulses or behaviors may be more advanced—finding tasks to keep themselves occupied, or using cue systems to notify caregivers about their needs.

On the other hand, low-functioning students might require constant support from an assistant or aide, who will be responsible for implementing most of the elements of the BIP.

Because consistent reinforcement is important to create lasting changes in behavior, a BIP is something that doesn’t just live in the classroom. As a parent, you will be responsible for following the same steps as your child’s teacher to avoid providing mixed messages about how the child is expected to behave.