5 Top Athletes on the Autism Spectrum 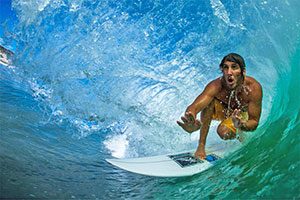 She can’t play softball. She won’t be able to fit into the team environment … He can’t be part of the golf team. He will be a disruption to the other golfers … He can’t swim competitively. He doesn’t have the strength or coordination … She can’t become a competitive runner. She can’t handle the crowds.

Pigeonholing, typecasting, stereotyping— whatever you want to call it, children on the autism spectrum too often find themselves working up hill against shortsighted assumptions and preconceived notions that try to place limits on what they can do.

Granted, interpersonal skills and reading social cues don’t come easy, there may be problems with impulse control and hyper-focusing, an inclination toward repetitive behaviors and stemming may not be the right look for an athlete.

But while some of the behavioral, cognitive and emotional differences that define autism may make you feel like getting your kids involved in the hyper-competitive world of sports isn’t the best idea, there is a growing number of athletes on the autism spectrum who have bucked the stereotypes and made a name for themselves.

While Heisman Trophies may not be commonplace for individuals on the autism spectrum, the issue might really be more about the fact that many kids with ASD haven’t been allowed to participate. Don’t compound the issues your kid deals with by placing limitations on them that don’t need to be there. It is entirely possible that your kid has actual athletic talent that, if fostered, could allow them to achieve excellence – and the odds are getting better all the time as society continues to become more socially aware and accepting of people that might be a little different.

We’ve assembled a list of some top athletes who are on their game, and on the spectrum. These five athletes have been killing it in everything from team sports to individual sports to extreme sports.