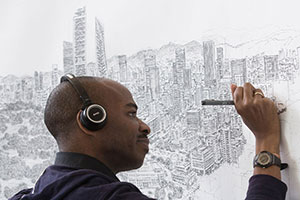 We don’t often enough ascribe positive attributes like accomplished, protege, or genius to people on the autism spectrum, yet, there are plenty of people with ASD that have displayed amazing talents and abilities in many areas of life including the visual arts.

Throughout history there’s been highly acclaimed artists who were suspected of having ASD and many are eager to link them to it. Of course we can’t prove this to be true given the fact that it was an unknown disorder until the 1940s, but still some of the signs were there and it’s fun to muse on the possibility.

For instance, it’s rumored that Michelangelo may have had autism, and he’s one of the most influential artists of the Renaissance period, responsible for works of absolute genius, including the fresco on the ceiling of the Sistine Chapel, a project that took four years to complete. Was it the fixation and obsession often associated with autism that allowed him to work for so many years on one project? We can’t be certain, but modern medical experts have determined it’s a real possibility.

But what about today? Are there other artists that have actually been diagnosed with autism that display such talents? There may never be another Michelangelo, but there are certainly those artists with ASD who have extraordinary gifts. Below are five such artists, each diagnosed with autism and every one of them amazing in their own right.