How is Discrete Trial Training Used in ABA Therapy? 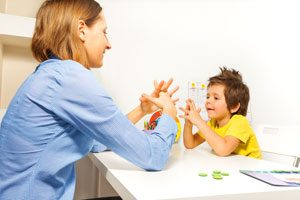 Discrete Trial Training, or DTT, is one of the most common types of therapy used to treat autism spectrum disorder. Widely adopted in both school systems and by many private practices, as a parent, teacher or clinician working with kids on the spectrum, it would almost impossible not to run into DTT at some point.

The system is also used outside of autism treatment today to address behavioral issues associated with everything from addiction to traumatic brain injury.

Back in the 1980s, Dr. Ivar Lovaas developed discrete trial training as a technique for working with children with autism. It’s a primary component of the Lovaas Method, one of a number of different techniques applied behavioral analysts use to address behavioral issues associated with ASD.

Breaking Behaviors Down… and Putting Them Back Together Again

The key aspect of DTT is that it breaks behaviors down into very small, discrete components, and reinforces them methodically and sequentially to build up into one overall desirable behavior.

Linking a number of separate skills together in this way is called chaining.

With complex behaviors – which, depending on the child could mean navigating through a full school day, or just getting through bath time without a meltdown – this helps avoid the problem of being unable to successfully reinforce all the little victories required to ultimately achieve a positive outcome. If a behavior involves many steps, waiting to the final step to provide a reward doesn’t help reinforce intermediate steps or allow an easy way to correct any behaviors that missed the mark along the way.

Discrete trial training provides a controlled way to isolate and reinforce behaviors that have complex antecedents or consequences, like how to behave at lunchtime in the cafeteria at school. When you break it down, you might be surprised by the number of different small hurdles that need to be cleared during a 40-minute lunch break: Recognizing the lunch bell… going to the cafeteria… lining up quietly and getting a tray… finding a place to sit in the social chaos of the cafeteria… cleaning up after yourself… and making it to the next class on time.

Discrete trial teaching breaks it all down into individual steps, each one described and practiced with clear and direct instruction. In its final phase, DTT then puts all these steps back together to form the complete sequence of events that together comprise the lunch break

There are five steps to each DTT trial.

Discrete trail teaching can also be useful in cases where the behavior is not apparently complex, but where being able to adopt the behaviors immediately would nonetheless be difficult using other methods of ABA. People on the low-functioning end of the autism spectrum, for example, might benefit from DTT for a behavior as simple as asking someone if they want to play. Learning the sounds of each individual word or even conceptualizing play could each require a separate discrete trial.

The therapist provides prompts to the patient designed to elicit the correct behavioral responses. When the therapist gets the response they’re after, a reward is offered to positively reinforce that behavior. If the response is not appropriate, the therapist will gently correct the child and attempt the drill again. This activity is designed to shape the responses, providing guidance so that the prompts are not simply seen as random antecedents but instead as part of an overall structure of behavioral patterns. With this structure in place, many children are able to go on to manage their own behaviors effectively on their own.

DTT Has Had a Rocky Past, But Remains Common In ABA Today

Unfortunately, DTT also led to some of the initial criticisms of using ABA for autism therapy, since Lovaas’ implementation originally included the use of aversive reinforcement such as yelling and electric shocks. This type of reinforcement was quickly abandoned for positive reinforcement mechanisms, whether praise, or candy, or a toy, or a desired activity like coloring or watching a video.

There is a considerable amount of research showing that DTT therapy results in positive outcomes. In fact, ABA earned a lot of its scientific stripes by proving itself effective in treating ASD during those DTT studies.

All of this intensive and discrete therapy is time-consuming and can be exhausting for both the patient and therapist. For example, under ideal circumstances the Lovaas method of DTT is performed at least five days each week for a total of 35 to 40 hours of therapy. This could be draining for anybody.

Since much of this involves the slow and steady process of doing basic repetition around the targeted skills, it’s often called table work and viewed as a fairly mind-numbing procedure. But the therapist will proceed with new skills at whatever pace the patient is capable of learning them, so this is mostly a criticism leveled by parents or other observers.

The astute therapist will always make a point to move on to other topics or introduce breaks when they feel the patient is losing focus.

There are still criticisms of DTT within the ABA community. One early critique centered on the lack of validity in some of Lovaas’ original experiments using the system. Others point out that the technique is primarily instructor-initiated, and may lead to rote responses since the reinforcers are unrelated to the tasks at hand.

However, most modern practitioners of DTT combine it with other forms of ABA, such as Natural Environment Training, which work to alleviate many of these concerns. As a body of practice, ABA, including DTT, continues to be the most effective treatment available for ASD, as well as many behavioral issues not related to autism.