How Does ASD Differ from Angelman Syndrome? 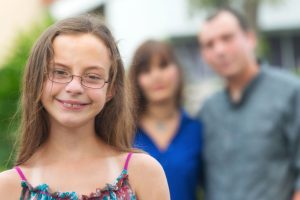 In 2008 the Centers for Disease Control and Prevention reported that worldwide, one in every six children born has some type of developmental disability, ranging from things as mild as speech impairments, to more serious disorders like cerebral palsy or autism.

With so many children with such a wide range of problems, doctors sometimes miss things or otherwise fail to correctly identify disorders – especially in the early years.

This happened to be the case with a young girl named Melissa Adams born in the small village of Eccleston in Lancashire, UK. By the time Melissa was twelve months old, her mother Kathryn knew something wasn’t right. She wasn’t hitting the expected developmental milestone, and seemed to be completely nonverbal. Still, doctors insisted that there was nothing wrong with Melissa.

For the next two years, Kathryn continued to push for answers.

Finally, at the age of two, doctors told Kathryn and her husband Steven that Melissa had autism. This diagnosis didn’t sit well with Kathryn. She felt that it was something different so she took it upon herself to begin researching Melissa’s symptoms online.

Doing her own detective work, Kathryn came to the conclusion that her daughter had Angelman’s syndrome (AS): a rare disease that affects only 1 in 12,000 – 20,000 children, according to the National Organization for Rare Disorders (NORD).

Armed with the information she gathered in her online research, Kathryn approached her doctor insisting she had the correct diagnosis. Doctor after doctor disagreed. She even had one doctor remark that Melissa was “too pretty” to have Angelman’s syndrome– whatever that meant.

The genetic tests for AS are expensive and not something that would be casually approved in the UK’s socialized medical system. Kathryn felt the medical community was simply trying to avoid the expense. But under Kathryn’s unrelenting persistence, doctors finally relented.

The first test came back negative. The second test finally proved that Kathryn was right. Her daughter, at the age of three, was diagnosed with Angelman Syndrome.

Why Did Doctors Miss This?

Doctors can hardly be blamed for missing disorders that are extremely rare, especially when the symptoms are so closely aligned with far more common disorders. Doctors are trained to look for horses not zebras. A doctor will likely exhaust all the more common medical explanations for any symptoms that may be present before going to more exotic and rare ones.

In fact, they may be totally unfamiliar with many rare conditions, having never actually encountered cases themselves, let alone studied them in depth. A doctor’s knowledge of extremely rare medical conditions and genetic disorders is often limited to a single paragraph in a textbook they read back in medical school.

A number of symptoms of Angelman Syndrome are strikingly similar to those seen in infants and toddlers with autism spectrum disorder (Mayo Clinic):

Still, other symptoms are unique and stand out as more telltale signs of Angelman Syndrome:

Still, it’s easy to see why autism may be confused with AS. The hallmarks of autism include developmental delays, verbal issues, and repetitive movements such as hand flapping.

Plenty of other symptoms don’t align, however.

Acting in a way that conveys an exaggerated level of happiness and excitement during the early stages of development can be a key indicator of Angelman Syndrome, but is not something seen in children on the autism spectrum. In fact, at one time, Angelman Syndrome was referred to as “happy puppet syndrome,” because of the characteristic of stiff puppet-like movements coupled with a consistently cheerful personality.

Though head size isn’t included in the diagnostic criteria for either syndrome, there are instances when it presents itself as a differentiating characteristic:

Angelman syndrome is a confirmed genetic disorder. It’s the result of a missing or defective gene located on chromosome 15 and, even though it’s genetic, it’s unlikely to be hereditary. Typically it will not be repeated in the same family.

Autism, on the other hand isn’t specifically identified as a genetic disorder to date (although there is prevailing research that indicates this may soon change). In fact, if it is discovered to be genetic, it’s possible that it will be determined to be hereditary. As of May 2017, scientists have identified 61 genes associated with autism, and continue to search for more genetic clues.

In the first months of Melissa’s life, it’s easy to see why doctors may have misdiagnosed her with autism. Parents like Kathryn and Steven need to trust their instincts, however, if they feel something isn’t right. The family doctor will certainly have your best interest at heart, but can’t be expected to be experts in all medical conditions.

Early intervention is key to addressing the behavioral challenges that are often associated with autism, and key to seeing to it your child is able to enjoy all the normal social experiences that are so much a part of a healthy childhood. Even in the unlikely event that you discover your child does, in fact, have Angelman Syndrome, there is some promise that medical treatments of the future could mitigate the effects of the disorder.

Knowing what is going on with your child, obtaining an early correct diagnosis, and staying current with treatments and therapies that are available (or on the horizon) could make all the difference in your child’s life both now and in the future.

Always remember that, no matter how smart your doctor is, you are your child’s greatest advocate.