How Does ASD Differ from Rett Syndrome? 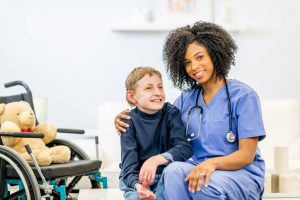 Fifteen years ago, the Hannas suspected that something wasn’t quite right with their newborn daughter Sara. Very early on she started having severe acid reflux. The doctors diagnosed her as lactose intolerant. At six-months, Sara wasn’t meeting the typical motor skills milestones. Concerned, the Hannas again consulted her doctors who assured the couple that some children just take longer to develop. They weren’t satisfied with that explanation so over the next few months they pushed their doctors for a better answer. By eight months old, Sara was mistakenly diagnosed with general developmental delay and began receiving physical and occupational therapy…

Crystal and her husband were high school sweethearts. Their son Matthew was the firstborn of their four children. When Crystal looked at his sweet newborn face she knew something seemed different. As time went by, just like Sara, Matthew began showing signs of abnormal development. By the time he was six months old, he had missed most of his developmental milestones. Crystal pursued doctors for answers. Matthew wasn’t sitting up and doctors told Crystal she was holding him too much. As the months progressed and he missed more markers, pediatricians told her that his delays were her fault, that she didn’t talk to him enough or that she carried him around too much. It took nine years for Matthew to receive a proper diagnosis…

Grace was born to the Halford family in 2009. She was a beautiful baby who cooed, made eye contact, and smiled. At one year, she was able to sit up, feed herself and she laughed a lot- in fact, according to her father, Steven, she very seldom cried and seemed like a very happy normal baby. Steven went away on a mission trip in 2010 for two weeks. When he came home, something about Grace had changed. She wasn’t making eye contact. She began acting “floppy” and couldn’t sit up in the high chair. She wouldn’t feed herself. He thought Grace was just “taking her merry time to reach her milestones.” Her parents decided to take her to the doctor just to be certain, but the appointment would be another six weeks away. About a week after finally seeing the doctor, and not receiving any diagnosis, Grace stopped eating. Her eyes crossed. The Halfords couldn’t wait any longer. They rushed Grace to the emergency room at the local hospital after which followed many more trips to the pediatrician who finally diagnosed her.

The children’s problems were different, however. Sara and Grace both suffered from Rett syndrome while Matthew was eventually diagnosed with autism spectrum disorder (ASD).

What is Rett (RTT) Syndrome?

Signs of RTT typically begin to emerge at between 6 and 18 months. During the early months, prior to any evidence of a problem, a child’s development often seems normal, as was the case with Grace.

RTT symptoms are often mistaken for ASD. This is due to the fact that when early signs emerge, they are very similar: withdrawal from social engagement, loss of communication abilities, and developing repetitive movements. At one time RTT, originally described in 1954 by Dr. Andreas Rett, was actually considered part of the autism spectrum based on these similarities. It was widely believed that it was just one of its most severe forms. In 1994 it was included in the DSM 5 as a mental health disorder, separate from autism.

In 1999 researchers discovered that Rett syndrome was most often caused by a unique, relatively rare (1 in 10,000 births), a non-heritable genetic mutation of the MeCP2 gene. Because this gene is located on the X chromosome, it mainly affects females. Males, having only one X chromosome, rarely survive to birth.

Rett syndrome can include the following symptoms (Mayo Clinic):

Although there are other supporting criteria for RTT, these four must be met in order to meet the criteria for the diagnosis.

In 2011 Rett syndrome was removed from the DSM-5 manual, as it was no longer considered a mental health disorder. One reason for removing it was that “the severe autistic features are only present in a very narrow window in the life of the patient,” according to Walter Kaufmann, director of the Kennedy Krieger Institute’s Center for Genetic Disorders of Cognition and Behavior in Baltimore. These symptoms may disappear and other more regressive symptoms start to show up in the child’s development.

Though Some Symptoms are Similar, ASD is Actually Very Different from Rett Syndrome

Autism (ASD), unlike Rett syndrome, is fairly common by comparison. One in 88 children are affected by autism, which is considered a group of developmental disability, unlike RTT, which is labeled as a rare genetic neurological and developmental disorder.

Because there isn’t an organically known cause for ASD, it’s included in the DSM-5. “The DSM is about behavior, not cause, or ‘etiology,’ ” according to The American Psychiatric Association. Because there is no known genetic marker for ASD or specific organic cause of the disorder, it fits the DSM criteria. Autism ironically affects boys more than girls – just the opposite of Rett syndrome.

Symptoms of autism (The National Institute of Neurological Disorders and Stroke) include:

In order for a child to receive a diagnosis of autism, they also must meet certain criteria outlined in the DSM-5 manual:

Unlike Rett syndrome, autism may not fully reveal itself under clinical analysis until a child is older (as was the case for Matthew).  Another unique trait in ASD is that children on the spectrum tend to prefer objects to people. This is opposite of RTT. With Rett syndrome, the preference is typically towards people. Children with ASD usually reject physical affection and those with RTT typically enjoy the attention.

Life span for the child with autism is similar to the general population. For a child with RTT, little is known about the mortality rate due to the lack of historical information. Currently, the statistics show that those with RTT have a 50% chance of surviving to age fifty. They often die due to respiratory complications.

It’s easy to see why in the beginning of a child’s development Rett syndrome found a place on the autism spectrum; the symptoms are similar, but things change quite rapidly as the child develops. There is still some debate and controversy about RTT being removed from the DSM-5.

As genetic research continues to unfold, it’s possible that new discoveries will show that autism also has an underlying genetic marker, especially given the evidence that it tends to run in the family. Until that time, autism remains in the DSM-5 and Rett syndrome stands as a separate medical issue.