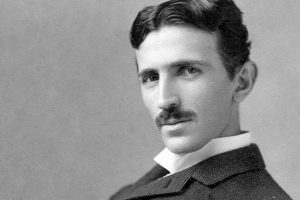 Until Elon Musk borrowed the name for his electric car and power cell company, Nikola Tesla was largely unknown to most of the American public.

Even today, cruising around in the sleek Model S, many Tesla owners don’t realize that the very first alternating current electric induction motor – the great, great grandfather of the same motors that rocket them silently down the highway – were originally invented by the man the company was named for.

Tesla was a Serbian-American inventor whose name largely fell into obscurity after his death, eclipsed by Edison, Westinghouse, and Marconi, all contemporaries with more talent for commercializing their work. In recent years, due to the car company and a resurgence of interest in the technology world, Tesla’s name has started to emerge again and his particular genius has started to get the recognition it deserves.

Even in his own era, at the turn of the 19th Century, Tesla was better known for more flamboyant and extravagant inventions—the Tesla coil, a dramatic resonant transformer circuit that spits dramatic violet lightning into the air… X-ray machines… radio remote controlled boats zipping around pools in Madison Square Garden.

His exploits generated headlines throughout his life—he consulted on the power generating plants at Niagara Falls… knocked out the early electrical grid in the American southwest by generating massive artificial thunder and lightning at his lab in Colorado Springs… intercepted radio signals that he believed might originate from another planet.

The man was quite simply one of the great eccentric geniuses the world has ever known.

Some Eccentric Quirks Might Hint at the Possibility of Autism

Tesla garnered headlines for other reasons that fascinated the public, as well:

Because of his inventions and the era in which he lived, many of Tesla’s quirks were seen simply as the eccentricities of a genius—the archetype of the mad inventor.

But looking back, it’s easy to see many of those some quirks as evidence of typical symptoms of an individual with high-functioning autism.

Was Tesla’s Genius The Other Side of The Autism Coin?

The genetic links between autism and genius are poorly understood but very real. Studies have shown that families in which there is a higher than average likelihood of producing children with ASD also have a higher probability of producing children with genius level IQ or streaks of savantism. Interestingly, Tesla’s mother showed traces of possible eidetic memory, with an ability to memorize long poems and showing creativity in developing unique tools for solving problems around the home; Nikola himself credited her for some of his own skills.

Temple Grandin, another brilliant scientist with autism, has identified Tesla as another likely historical figure to have had ASD.

The record is less than completely clear about Tesla’s supposedly autistic qualities, however. If he showed the early-childhood social and communications difficulties that are part of the modern diagnostic criteria for ASD, they were not well-documented.

Despite some quirks in his behavior and an adherence to specific schedules, Tesla didn’t show any particular social skills deficits as an adult. In fact, he was well-known for his showmanship and charm. Although he was something of a recluse in daily life, secluding himself in his laboratory for long periods of time to work, he was also marked for his bearing, refinement, and generosity in his interpersonal dealings. A long-time secretary described him as having a gentlemanly bearing.

And despite showing signs of obsessiveness surrounding his work, Tesla was also often noted for having a wide range of interests. He became close friends with Mark Twain and other notable writers of the day. His interests were said to extend to music, language, philosophy, and epicurean delights. This facile integration with society and broad range of interests is not entirely unknown among persons with ASD, but it is not common, either.

Looking back at historical figures like Tesla with modern interpretations of their behavior and accomplishments will never fail to be interesting, and it can also serve another purpose: inspiration, for those thousands of kids diagnosed with ASD, demonstrating that great things can be possible despite facing enormous obstacles.

Whether or not Tesla, or Einstein, or Newton, or other geniuses of the past were actually on the autism spectrum or not is actually beside the point. We know that there are connections between autism and genius and we know that great things can come of anyone with ASD, whether genius or not.