What is Meant by the Autism “Spectrum?” 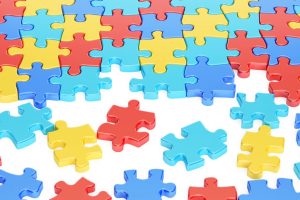 When actress Jenny McCarthy discovered her son Evan had autism, as she tells it, she immediately envisioned scenes from Rain Man (1988). In it, Dustin Hoffman portrayed an emotionally detached man having meltdowns over innocuous things like pancakes and missing an episode of People’s Court.

In a 2008 interview McCarthy described the day her doctor gave her the news: “I just stared at the doctor while remembering all the signs that led up to this moment. I felt each membrane and vein in my heart shattering into a million pieces. Nothing prepared me for this. I couldn’t breathe. I wanted it gone. . . I looked at the doctor with pleading, tearful eyes. This can’t be.”

But as fate would have it, her deepest concerns were not at all what came to pass: McCarthy followed up by saying, “He is very loving and sweet and not anything like Rain Man.”

Why is it so unpredictable and the effects so wide-ranging? That’s not completely understood. What is known is that ASD, while having some common and identifiable characteristics, will express itself differently in each person. The degree of severity will vary and the behaviors associated with the disorder will differ, often dramatically.

This is the gist of what is meant by “the spectrum.”

But that’s a bit simplistic. ASD goes beyond impact scaling to include a collection of disorders that have been placed under this new catchall umbrella; and these are the disorders that helped define the spectrum in the first place.

In order to have a better understanding of how and why this collection of disorders came be known as the autism spectrum, let’s take a look back at how ASD developed over time and how we got here.

Dr. Leo Kanner, a professor with John Hopkins and child psychiatrist, was the first to describe autism back in 1943. Dr. Kanner had a young patient, Donald Triplett (now known as patient #1), who displayed unusual behaviors that didn’t fit any known diagnosis at that time. He used the term autistic to describe the boy’s behavior:  “If there is any name to be applied to the condition of Don. . . I have found it best to speak of it as ‘autistic disturbance of affective contact.’”

In the early 1900s, Swiss psychiatrist Dr. Eugen Bleuler coined the term “autistic” (not to be confused with autism), as a term first meant to describe an aspect of schizophrenia (meaning splitting of the mind — a term Bleuler also coined). Autistic was used to describe a symptom in people with schizophrenia who avoided social contact by introverting into a fantasy life. “Autistic thinking was characterized by infantile wishes to avoid unsatisfying realities and replace them with fantasies and hallucinations.”

He originally left it in the diagnosis even though other symptoms didn’t fit. But as he continued to explore this new phenomenon, he found other children who displayed similar behaviors that were consistent with Donald’s.

In one of Kanner’s early papers he wrote:  “During the past few years, I have had occasion to observe 23 children whose extreme withdrawal and disability to form the usual relations to people were noticed from the beginning of life. I have designated this condition as ‘early infantile autism’ ” [Irrelevant and Metaphorical Language in Early Infantile Autism]—.

Later, in the 1960s, according to a paper on how autism developed, autism’s roots were reclassified. The concept of fantasies and hallucinations — both psychological qualities tied to schizophrenia — were replaced with a “deficit in certain aspects of linguistic thought,” basically making it a “developmental problem associated with language.”

This broadening of the concept of autism allowed for the inclusion of similar syndromes, including Asperger syndrome, Pervasive Developmental Disorder-Not Otherwise Specified (PDD-NOS), childhood disintegrative disorder, and autistic disorder. All of these share similar developmental problems that we associate with autism today.

The Day Many Disorders Became Classified Under Autism Spectrum Disorder

All of these disorders and their shared characteristics lead to a decision in 2013 that changed how autism was defined. The American Psychological Association’s Neurodevelopment Disorders Work Group officially adopted the term Autism Spectrum Disorder (ASD) in 2013, describing it in the latest version of the Diagnostic and Statistical Manual (DSM-5).

ASD is now the term used in the DSM to describe the full spectrum of developmental disorders, and appears in the manual with this caveat: “This proposed revision was developed because of the presence of very poor data, that failed to validate their continued separation.”

This means that all of these disorders are now clumped together because in their original context they didn’t have distinct boundaries. Experts only saw a separation because of certain characteristics (now considered an individual ASD presentation, but no longer labeled separately with historical names).

For example a child identified with Asperger’s Syndrome may be highly intelligent, without learning disabilities. On the other hand, they may also display behaviors associated with classic autism such as hand flapping, or they may speak with unusual or emotionless speech. These qualities are now considered “specifiers” that help define where someone with autism would fall on the spectrum.

So if we compare a child who has severe autism who can’t speak and can’t be left alone, to a child (historically labeled as having Asperger Syndrome) with a high IQ but who prefers to be alone and is resistant to change, each of these children will now fall within a range, from severely affected ASD to high functioning ASD – but they are both diagnosed as having autism spectrum disorder.

The common hallmarks now for all disorders placed on the spectrum, according to the DSM5, are as follows:

In the earliest years experts believed that autism was somehow directly linked to schizophrenia; it’s now understood that this is not at all the case. Others may even wrongly assume that autism is an organic disease; not a disease in the same sense we typically think of disease.

General consensus among practitioners today, however, is that it’s a neurological condition affecting a person’s ability to develop normally, and is likely rooted in a combination of unknown genetic irregularities, and possibly even some environmental factors.

Taking all the research gathered over the last century, combined with all the clinical observations described to date, we arrive at our current understanding of autism as a spectrum disorder with a wide range of cognitive variations, behaviors and expressions.

Is that the end of the story? Not likely. As the field of genetic science continues to develop, and science unravels the mysteries of human development, it’s more than possible that the umbrella of what we call autism spectrum disorder today will one day be deconstructed into more refined categories and perhaps removed from the DSM-5 all together.

For now, this is where autism lies on the spectrum of human understanding.