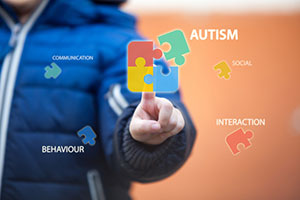 Does my child have autism?

If you’re asking this question, chances are you already have some serious concerns… and that alone is enough to make most parents feel scared, bewildered, and alone.

But the fact is, many parents find themselves looking for signs of a possible problem and asking this question simply out of an abundance of caution. That’s just good parenting and it’s only natural with the amount of attention autism has received in recent years. The good news is, most of the time concerned parents discover that everything is absolutely fine. Noticing a single red flag or even identifying a combination of concerns often amounts to nothing more than a child’s individuality expressing itself as some slight variation in normal developmental progress.

And on the other side of the coin, even if there is reason to believe your child may fall somewhere on the spectrum, the news is still good: You are not alone… Your child will go to school just like the other kids and learn in a regular classroom… You will get the help you need and your insurance will cover most of the expense… Breathe – everything is going to be all right.

Before you start arriving at any conclusions at all, it’s important that you’re very clear about one thing: You may be able to identify some traits that indicate the possibility of autism, but only a medical professional is in a position to say for sure.

The autism spectrum varies widely, but according to Washington Autism Alliance and Advocacy, about 46% of individuals on the spectrum have normal or even above average intelligence, while 25% show more obvious signs like being completely nonverbal or having very limited language proficiency at the stage you would expect the child to begin experimenting with verbal communication.

This neurological disorder usually presents itself when children are between one and three years old, though in plenty of cases it isn’t identified and diagnosed until much later. Mild autism may only present itself once the child is in school and starts showing some signs of difficulty with social interactions or if learning disabilities are identified.

The milder the case of autism, the more difficult it may be to identify and diagnose—however, even children on the high functioning end of the spectrum can benefit greatly from early intervention behavior therapy

Though it may be harder to identify ASD before the child reaches school age, there are a variety of symptoms you can be on the lookout for. According to the National Autism Association, ASD typically presents itself through any combination of four deviations from the norm:

Here are a few ways those difficulties may present themselves in young children with ASD: