What Drugs Are Used for Treating Autism? 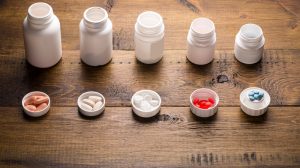 Applied behavior analysis is not the only treatment for autism, and for many years it was not even the preferred treatment.

Autism became more and more recognized during the same period that a whole host of new psychiatric drugs were being developed and brought to market. It was only natural that doctors and psychiatrists would turn to those drugs to treat the disorder. Additionally, many of the comorbid disorders or conditions that are commonly associated with Autism Spectrum Disorder – things like anxiety, depression, emotional dysregulation, and OCD – are most commonly treated with drug therapy. This made pharmaceuticals the obvious go-to treatment at the time.

Parents of children with ASD are commonly presented with a complex cocktail of medications with detailed and specific regimens that have to be followed to keep drug interactions and side effects under control. Sometimes additional drugs are prescribed to combat the side effects of the primary prescriptions… each of these also have their own requirements, restrictions, and side effects.

Figuring out how to keep an already difficult-to-manage child on those schedules is another difficult chore in a seemingly endless list.

This task can be more frustrating because there are currently no approved drugs available to treat the core communication, social, and repetitive behavior issues so commonly associated with autism. All prescriptions currently available simply work at the periphery of the real problems or otherwise represent doctors’ attempts to treat those conditions experimentally. Further, the common practice of prescribing a mixed cocktail of different medications for ASD has not been put through clinical trials. Many common drug combinations remain untested.

Understanding more about the types of medications that an ASD patient may be on can be important to both caregivers and therapists since both the capabilities and side effects of the drug may dramatically alter a person’s behaviors. There is also increasing concern, particularly with children on the spectrum, that the effects of psychotropic medications taken during the formative years can permanently stunt brain development.

Drugs used to treat ASD fall into several different categories, which are listed below with common trade names, the conditions they are designed to treat, and some of the more serious side effects. Almost all of the drugs also have common side effects such as:

Considering the wide variety and volume of prescriptions written for autistic patients, it often surprises people that there are actually only two FDA-approved psychiatric medications for autism. Both are designed to control irritability and aggression, but have secondary benefits as well.

Antidepressants have been controversial in recent years, as the long-term effects of the new class of them, known as Selective Serotonin Reuptake Inhibitors (SSRIs) have been shown to cause fundamental and hard-to-reverse changes in brain chemistry. This can make it very difficult to stop using these drugs after starting, resulting in something called discontinuation syndrome, which is often worse than the original symptoms. Dosages are difficult to calibrate for individuals and often require long periods of experimentation to dial-in for proper effectiveness.

One of the reasons that so many off-label drugs are prescribed in ASD cases is that the effects of SSRIs can be wide-ranging and can differ from person to person. Bizarrely, some SSRIs list, as potential side effects, some of the exact conditions they are used to treat—in fact, in 2004 the FDA issued a black box warning, their strongest category, that SSRIs may, in fact, increase the risk of suicidal thinking and behavior… not exactly the effects you would hope for in a medication designed to treat depression.

Worse, the effects of SSRIs are increasingly being questioned, with numerous studies finding them no more effective than placebos in mild cases of depression. A 2013 study specific to uses in ASD cases found moderate effectiveness in adult patients, but none at all in children.

There are a handful of non-SSRI antidepressants that are also used in autism treatment, but they are not as commonly prescribed for two reasons:

Stimulants are commonly used on ASD patients to treat inattention and impulse control problems. They are particularly common when the patient also has attention deficit/hyperactivity disorder (ADHD).