What Makes Some Autistic People So Good at Math? 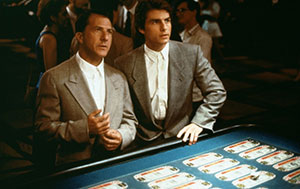 “Rain Man” was one of the first movies to show an autistic character in a main role, with Dustin Hoffman’s portrayal of autistic savant Raymond Babbitt winning him an Oscar.

It did not, however, win a lot of fans in the autism support community. Since “Rain Man,” the overwhelming public perception of autistic individuals is that they are all math whizzes with strange obsessions and an unreasonable fear of air travel. Many people, either those diagnosed with ASD or with an autistic person in the family, have had the experience of telling someone about the condition and hearing a response along the lines of, “Oh, right, like in ‘Rain Man.’ At least algebra class was easy, right?”

While Hoffman’s portrayal of the symptoms of a high-functioning autistic individual were actually quite nuanced and accurate, in fact his character was based on a small subset of ASD patients, the autistic savants. Only about ten percent of autistic individuals are also savants.

Not All Autistics Are Mathematic Savants, But Many Have Above-Average Math Abilities

It turns out that, despite impressions, most ASD patients may not be any better at math than their counterparts at a particular age or developmental stage. This was confirmed in one 2007 meta-study finding that the majority of participants with Asperger’s or high-functioning autism performed no better than average on math skills tests.

But many ABAs, among other professionals, have noticed that their ASD patients tend to exhibit extraordinary math skills, and a 2013 Stanford study has both provided a foundation for that observation and a clue about why autism can unlock the potential of the human mind to perform prodigious feats of arithmetic.

Looking at a group of 36 children within a common IQ range, half diagnosed with ASD and half non-autistic, researchers found that the autistic students consistently outperformed their counterparts in math performance.

Even more intriguing, the researchers performed some of those math tests while observing the patient’s brain activity in an MRI scan. The autistic subjects consistently exhibited unusual brain activity in the ventral temporal occipital cortex—an area of the brain that is typically devoted to visual processing and skills such as facial recognition.

If confirmed, this finding would seem to indicate that in sacrificing one type of brain function, autistic patients are gaining another. It’s long been known that one symptom of autism is a difficulty in recognizing faces. The Stanford study suggest that the brain has repurposed the area devoted to that function to augmenting arithmetic functions instead.

But in identifying this common repurposing of a particular region of the brain, scientists may have found a point at which to begin categorizing and researching autistic brain function in a useful way.

For applied behavior analysts, this finding may simply confirm their previous observations, but also indicates one strong potential avenue for therapy with ASD patients. Many ABAs find themselves working primarily with children, attempting to use behavioral methods to teach common academic skills.

Since math may already be a strength for many of these children, it provides an avenue for teaching ABA techniques like differential reinforcement and self-monitoring. A 2016 meta-study of 13 related studies indicated promising outcomes from the combination of behavioral and mathematical interventions with ASD students.

And although it is not as relevant to the daily work of an ABA in autism therapy, the underlying knowledge that some of the challenges of dealing with autism are directly related to gifts that come with the affliction as well can be reassuring to both patients and their families. Although not every ASD patient can win big by counting cards in Vegas, many of them can look forward to valuable, productive work in math-heavy fields such as science and engineering—careers where their unique brain wiring may offer a concrete advantage.