How is Autism Diagnosed? 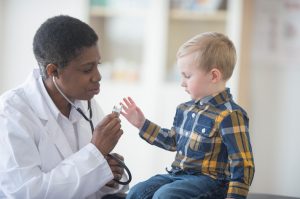 The difficulties in conclusively diagnosing a person with Autism Spectrum Disorder (ASD) show up right in the name of the affliction: as a spectrum, it can represent a wide range of different degrees of severity and types of symptom, usually including:

These different combinations of behavior and function have always been difficult to categorize. Since autism was first described as a distinct disorder in the early 1940s, it was joined by a handful of other similar syndromes and disorders, including:

Each of these attempted to describe a distinctive set of symptoms and degrees of disability, but each of them failed to fully capture the range of possible symptoms and behaviors.

And making things even more complex is the fact that there are considerable overlap between ASD symptoms and those of other common developmental disabilities.

A confusing and sometimes upsetting fact for families is that there is no definitive medical test that can diagnose autism; there is no brain scan or blood test that can detect it. The diagnosis must be made by a psychologist or specially trained physician on the basis of observation and interaction, and involves both judgment and guesswork.

In 2013, the American Psychiatric Association took matters in hand with the release of the 5th edition of their Diagnostic and Statistical Manual of Mental Disorders (DSM-5). The manual is a standard for psychiatrists and other medical professionals in describing and diagnosing mental disorders, and it changed the diagnosis of autism-related disorders profoundly.

Asperger’s, CDD, and PDD were removed from the manual entirely. In their place, the autism category was redefined as a spectrum disorder, encompassing all closely related symptoms and behaviors.

Acknowledging the range of behaviors that an ASD diagnosis might encompass, the DSM-5 also provided criteria for assigning patients one of three functional levels. The severity of the disorder is assessed according to the degree of support required by the patient:

Of course, these measures are also largely subjective and can arise from either very severe deficits in one category—for example, extreme behavioral problems and anger management issues—or from a combination of deficits that make interaction in normal environments difficult.

How Autism Is Diagnosed Today

Autism typically manifests before a child reaches the age of two, although for some Level One cases it may not become clear until as late as eleven.

The CDC (Centers of Disease Control) recommends that all children be professional screened for autism at 18 and 24 months.

Most autism diagnoses begin with a screening tool such as the M-CHAT (Modified Checklist for Autism in Toddlers), Ages and Stages Questionnaire, PEDS (Parents’ Evaluation of Developmental Status) or other type of questionnaire.

An M-CHAT, for example, is simply a list of questions asking parents about their child’s reactions in certain common situations. For example, they are asked if the child will look at an object if someone points at it, or if the child likes to climb on objects. Although by themselves, none of the questions necessarily indicates a problem, if enough fit the ASD profile, further screening is recommended.

A doctor or psychologist, usually in one of the following specialties, would typically perform that screening:

There are many advanced diagnostic tools used by those professionals in ASD testing, including:

None of these are used in isolation, however; the specialist will use one or more in combination with their own directed analysis of the child against the DSM-5 criteria.

There are specific signs in each of the criteria, some of which include multiple options that must be observed. The full text of the DSM-5 autism section can be read online at the Autism Speaks website.

The clinician will also assign a support level based on what they observe.

It’s important to note that these diagnoses are not necessarily static. It’s rather common for symptoms and severity to fluctuate over time. Additionally, reasonable diagnosticians may disagree over specifics, which can be enough to tip a diagnosis towards positive.