What is FG Syndrome (FGS)? 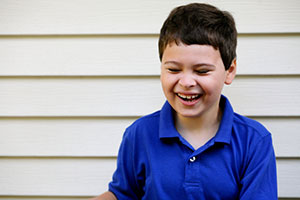 F-G-S… Think a simple explanation of exactly what the “F” and the “G” stand for will give you some insights into the disorder? You’re out of luck; it’s actually just the surname initials of the first family formally diagnosed with the syndrome.

Classifying genetic and developmental syndromes can be confusing at best. Is it autism? Is it FG Syndrome? OCD? A combination of two or more syndromes?

What we do know about FG Syndrome (FGS) is this: It’s genetic, and it usually comes with a handful of physical abnormalities and conditions. These can include hypotonia, chronic constipation, a wide and high forehead, small ears, chronic ear infections, respiratory conditions, and sensory integration issues, among other markers.

Those with FG Syndrome are usually witty, friendly, inquisitive, anxious, and eager to please. They are almost always male.

For many years, researchers thought that FGS always came with significant developmental delays, but we now know that some individuals with FGS actually fall into realms of gifted and talented.

Remember Rain Man? Kim Peek, the inspiration behind the movie, actually had FG Syndrome (not autism) which accounts for his remarkable abilities.

How is FGS  Diagnosed?

While there is a DNA test for FGS, experts disagree as to whether or not this test, which looks for abnormalities in the MED 12 gene, is definitive.

There appear to be a number of individuals who share most or all of the common traits of FGS without actually demonstrating the specific gene mutation that testing looks for. In recent years scientists have discovered mutations on other genes that might be related to other forms of FGS.

One Diagnosis or Two? Or Three?

Circling back to the issue of autism, many children with FGS are first diagnosed with autism. Genetic testing and/or the existence of multiple FGS related symptoms can lead to a single diagnosis (FG Syndrome) or a dual diagnoses (FGS plus Autism, OCD, or other developmental disorders).

Although currently categorized as rare, some researchers question whether or not FG Syndrome occurs more often than recognized, suggesting that due to its similarities with other developmental disorders FGS often gets mis-categorized. Others, however, insist the syndrome is already over-diagnosed.

Why The Diagnosis Matters

While some families still dislike “labeling” their child, these diagnoses impact the choices public school systems make when it comes to accommodating children with Individualized Education Plans (IEPs). What sort of special accommodations will the child receive? Will they receive one-on-one help? Will they be mainstreamed? Will they join special autism-specific programs to work on behavioral and social issues?

Depending on the needs and challenges of the specific child, some families find that a dual diagnosis works in their favor to provide their child with the best possible resources. Others, however, feel that the addition of “autism” places their child in programs that don’t quite fit.

Because FGS can come with serious medical complications early intervention is key. Respiratory, cardiac, feeding and/or elimination issues can lead to death if not addressed during early infancy.

Not all children with FGS face life-threatening health issues. The struggles they do face, however, can feel overwhelming at times. These can include:

One issue that deserves special mention is challenging eating habits. Children with FG Syndrome can be quite picky or refuse to eat altogether, something attributed to sensory integration issues.

Even more worrying, some children stuff food in their cheeks or up against their palate to “save for later”. This can result in aspiration and death if the child falls asleep with food stashed, so parents and caregivers need to pay special attention to the child’s mouth before bedtime.

Another dangerous habit is sometimes referred to as “food bolting.” This is when a child quickly stuffs their mouth with food, often swallowing without chewing. In addition to social stigma, this habit can lead to choking.

Caregivers should be prepared to administer the Heimlich Manuever if necessary. A few hours of first aid training is worth the peace of mind that you can respond immediately if an eating-related or other crisis arises.

The intellectual ability among those with FGS ranges from severely mentally disabled to extremely high functioning. Some children may continue to live at home, possibly working with the aid of a job coach, while others go on to college, start a career, marry, and have children of their own. Somewhere in the middle, some will live in group homes while maintaining a certain amount of independence.

Generally, children with FGS have equivalent life expectancies to other children who share their physical ailments, including cardiac and respiratory problems.

This is a fairly complicated question. FG Syndrome is generally passed to males from their mother, and to females from their father. Females usually become carriers, without having obvious FGS markers. Some children experience a spontaneous gene mutation that can also cause FGS, but this is the most rare form of the syndrome.

Parenting a child with specials needs often feels like a roller coaster of elation over unexpected successes followed by despair when new problems arise. Therapists also put huge energy and love into the children they treat, and at times they can become frustrated with parents who don’t follow the home program 100%.

It can be helpful to encourage parents to find outside support. Sometimes a lack of follow-through is simply the result of burn out and exhaustion. Support groups for parents of special needs children often provides the boost parents need to re-engage with their child’s therapy with renewed enthusiasm and sense of purpose.

As one mother of a special needs child says, “I also think it is healthy for special needs parents to consider therapy or counseling when things get rough… Special needs parenting goes so much deeper than what most people realize. I’m becoming more and more aware of how many resources are out there and how to take advantage of them to best benefit myself and my family.”

In the midst of the struggles it can be helpful for parents to pay special attention to the unique positive attributes of their child; their warmth, wittiness, and sociability. With intervention, children often surprise parents and caregivers with their resilience and their ability to bring joy to the family despite the challenges inherent to FGS.