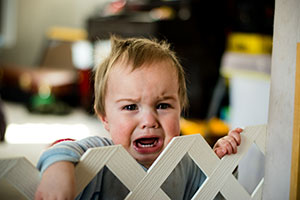 It’s a situation that most parents face at some point in time: Mom and Dad busy cooking dinner while two year old daughter Grace stands at the safety gate, crying.

Grace isn’t hungry, wet, or hurt. Like clockwork, if Grace finds herself separated from Mom or Dad by a gate, the crying ensues.

What should you do?

You’ve probably heard (over and over) that you need to ignore the child to avoid feeding attention-seeking behavior.

“Even when it’s attention seeking [behavior], ignoring can’t be the only answer because we haven’t taught them what else to do,” Jamie says. Jamie is the creator of a method called Pretend You Are a Light Switch®, a way of responding to unwanted behaviors that goes to the root of the problem without triggering the child further.

So if you’re not going to ignore, what should you do? Here is how Jamie approaches this situation.

In the end, choosing to proactively teach your child instead of simply ignoring unwanted behavior equips them with the tools to respond to future situations in a way that is healthy and socially acceptable.