ABA Licensing is About Consumer Protection… Here’s How it Evolved 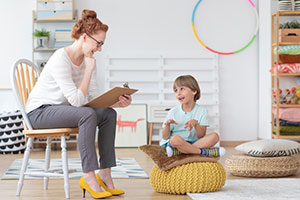 What happens when the demand for practitioners in a field suddenly explodes? Can this actually breed danger for the consumer?

Here we talk to Dr. Michael Dorsey, one of the early pioneers of ABA licensing laws who penned the first model legislation, which would later be adopted into state law. He offers a look at how the field of ABA is walking the long road to universal licensing requirements and the protections this offers consumers.

“You’re not going to remember me,” the voice on the other end said, “but I helped you on your dissertation back in 1978. My name is John Scibak.”

‘Oh my god,’ Dr. Dorsey thought, ‘I haven’t spoken with this guy since I moved away!’

Dorsey, Ph.D., LABA, BCBA-D of Endicott College, had no idea that this phone call would launch a many-years-long journey that would spark ABA licensing laws in 28 states and put greater scrutiny on those who might use the title “Behavior Analyst” without solid credentials.

Then came the 2000’s. With autism and addiction in the spotlight, the general populace began asking—loudly—What will we do?

Sparked by the 1999 Surgeon General Report in Mental Health, government agencies turned their focus to exploring evidence-based practices. Behavior analysis, with its solid outcomes with people on the spectrum pushed behavior analytic services into the limelight. Suddenly a field that had been “peer rejected” in the 1970s and 1980s (Hassert et al.) found the niche where it would make its greatest contributions.

In 2006, the year of the fated phone call, the BACB certified roughly 2,500 behavior analysts, but many more were using the term “Behavior Analyst” or some variation of this title to describe their therapy practices.

These individuals varied widely in expertise and education, and consumers found it difficult to differentiate which providers actually offered solid, consistent services.

Behavior analysts also smacked up against insurance laws: in many places only licensed professionals could receive reimbursement for services. Licensing for behavior analysts didn’t exist, so individuals paid out of pocket for these much needed services. Some individuals were cut off from access, while others sought out less expensive, unqualified or impaired practitioners.

Finally, BCBA’s at times still found themselves at the bottom of the totem pole when working on teams with those in related fields. As Dr. Dorsey put it,

“I had been thinking…that the field of behavior analysis needed to evolve to the point, I like to say, where we’re invited to sit at the adult table. Especially in school districts in IEP meetings, because everybody else at the table is licensed: Licensed Special Education Teacher, Licensed Physical Therapist, Licensed Speech Pathologist—everybody there has a license, except us. Yet we’re coming in and trying to tell them how to do a better job in serving kids.”

Dorsey’s surprise caller, John Scibak, also felt passionate about the role of ABA in offering solutions to the consumer. He graduated from Notre Dame with his Ph.D. in Behavior Analysis years earlier and eventually found his way to the state legislature. Now in the process of writing a bill for regulating behavior interventions, he needed help from his old acquaintance.

The conversation stirred up things Dr. Dorsey had been mulling over for some time regarding licensing.

“So while I had him on the phone I said, ‘Well, how about if we do this: how about if I help you with that bill if you help me with this [licensing] bill?’ And he said, ‘Oh, that’s a great idea! Let’s do that!’”

At this point it was mid-December, and the bills had to be filed by December 31st.

Dr. Dorsey had never written a bill before, but he and Representative Scibak hunkered down for the next few weeks and wrote the two bills.

“And boy we made mistakes!” laughs Dorsey. “We wrote it to where behavior analysts would be under the Board of Registration of Psychologists, which was just the stupidest thing ever. But then the head of the Mass Psychological Association calls John Scibak one day and says, ‘I see you put behavior analysts under us. We strongly agree that you should be licensed, but we don’t want to have anything to do with it. If you’ll rewrite your bill, we’ll support you along.’”

While many enthusiastically supported the idea of licensing, Dorsey and Scibak hit some unexpected resistance from within the ranks.

Opponents argued that the process for getting the laws adopted in each state could prove costly and complex. They warned that wording can be tricky, and law writers may muddy the waters even more in regards to who can and can’t practice.

Dr. Dorsey admits that some of the resistance came from mistakes on his side. “We didn’t talk to enough behavior analysts and get enough broad support in the state to get people to understand why it was necessary and what the benefits would be.”

On the first two rounds the bill died before it even got out of committee.

Finally, on the third try, Dorsey and Scibak managed to get everybody on the same page.

“I really learned what the word compromise means, and was able to take some things I wanted out of the bill. We wrote a bill that people were able to support, got it through the legislature, got the governor to sign it.”

And so, in January of 2013 (roughly six years after the first try) the licensing bill was enacted in Massachusetts.

At its core, licensing is about protecting the consumer from unqualified practitioners.

In her article “I Abused Children For A Living” one of these unqualified practitioners states:

“I was hired off the street with no background in child development, no knowledge of autism or ABA, and no experience working with children, let alone autistic children. I. Literally. Did. Not. Know. What. Autism. Is.”

She goes on to describe her work as a “behavioral technician” as child abuse. Unfortunately, her article and a handful of similar articles darkened the view many uninformed parents had about ABA. They also brought to light the reality that untrained, unqualified “therapists” can actually do more harm than good when treating children.

(For an excellent layman’s rebuttal of this individual’s article check out the response by mother and ABA supporter Kathryn Sneed here.)

One more layer of credentialing will help distinguish qualified professionals. Equally important, addressing ethical complaints or questions of abuse becomes a more straightforward, local process, and the resultant discipline can mean a weeding out of inadequate practitioners.

“I think board certification has been a tremendous asset to the field, it’s done a great service over the last, what, 20 years now?” says Dorsey. “The difference between the national certification and local licensing is ethical complaints.”

In the past, if a consumer had an ethical complaint they needed to bring it to BACB in Denver. Currently 61,368 individuals hold BACB credentials at some level.

“I think it’s really difficult for the Behavior Analysis Certification Board to hold individuals to ethical standards when they’re looking at people in 27 countries around the world,” Dorsey explains.

Local licensing means that each state sees a limited number of cases, increasing the likelihood that adequate time and research will result in a fair response to ethical complaints.

“It is not uncommon for practitioners to call state boards with legal and ethical questions,” Hassert et al., explain.

Between 2012 and 2014 the nationwide demand for behavioral analysts doubled and roughly 20% of jobs in the “Counselors, all other” postings specified behavior analysis.

This increase, as well as the hard work of advocates like Dorsey and Scibak, propelled the pursuit of state ABA licensing across the U.S.

As of this writing, 28 states have enacted licensing laws and a number of other states are in the process of building local licensing laws.

“States are concerned about the cost of it, oversight, those sorts of things,” Dorsey acknowledges. “I talked to a person at the American Psychological Association a few years ago and he said it took the APA 25 years to get licensing laws in all 50 states for psychologists.”

And so behavior analysis as a field finds a seat at the adult table. Licensing opens doors with insurance companies and levels the playing field when practitioners work alongside other professionals.

So where does that leave BACB credentialing? Does credentialing still have a role in this new season of behavior analysis?

“For most states that have licensing the BCBA is the standard…The BCBA exam, the course sequence, the internship experience, all of those things that go into getting board certified are all the same standards they use for licensing.”

Essentially, certification serves as the foundational credential for behavior analysts, while licensing offers protection and gives consumers recourse in the event of a breech of ethics, while also providing validation in the eyes of those outside the field.

At the end of the day, it could be argued that one essential element of maturity is the ability to recognize and protect the needs of others. For the field of behavior analysis, licensing is a giant step in that direction.

Blogger and mother of two children in ABA therapy, Kathryn Sneed, writes, “I’ve lived in multiple states, hired multiple ABA companies, and gone through ABA therapy with my children first-hand. I have seen the good and the bad of ABA therapy… If you do your research and find the right ABA techniques, your child is going to thrive.”

Dr. Dorsey’s vision is that as the checks and balances of state licensing gain ground the field will continue to mature so that consumers don’t have to wade through the “good and the bad,” but can be 100% confident in the qualifications of any licensed practitioner in any state.