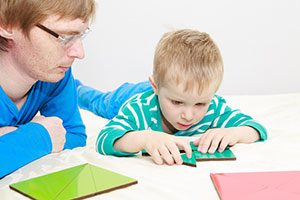 ADOS stands for Autism Diagnostic Observation Schedule. ADOS is a standardized diagnostic test for Autism Spectrum Disorder (ASD), published by Western Psychological Services (WPS) in 2000 and now available in 15 different languages. Since that time, it has become one of the standard diagnostic tools both school systems and independent clinicians use when screening for developmental disabilities.

ADOS is not required to make a diagnosis of autism. The current edition of the Diagnostic and Statistical Manual of Mental Disorders (DSM-5) governs the criteria for making an autism spectrum diagnosis, which any psychologist or psychiatrist can do using whatever methods they find effective.

What ADOS does is provide a systematic and standardized method for identifying kids with ASD. The process involves making direct observations under controlled circumstances that other clinicians are able to replicate. Only trained professionals can administer the ADOS diagnostic screening, but it eliminates some of the differences of opinion otherwise possible when two different experts provide a diagnosis without following common guidelines.

Although it’s not the only standardized diagnostic exam for ASD (the other popular option, the Autism Diagnostic Interview-Revised, is also published by WPS), it’s very likely that if you suspect your child may be showing traits that suggest they might be on the spectrum, they will have to go through an ADOS exam at some point. Here’s what you need to know about the process.

ADOS consists of four different modules. Each of them is designed to provide the most appropriate test for an individual at a certain age or functional level:

Each module consists of a set of standardized scenarios that the tester walks the subject through. For example, the presenter lays out a picture that provides a template for your child to place blocks on. The child is intentionally not provided enough blocks to fully complete the task, but the tester shows that they have more. How your child handles the dilemma is observed and evaluated. Do they make a polite request for the extra blocks? Point and scream? Refuse to continue? Each reaction is a scorable behavior for the examiner.

Other components include structured conversations or social scenarios, like a pretend birthday party or snack time. In many of them, minor obstacles are intentionally introduced; things like withholding the blocks, to see how the child copes with it.

The examiner will use a hierarchy of structures called presses to cue responses. In general, the child is expected to show initiative in the early parts of the test, without outside prompting; if this does not occur, the examiner will provide more and more specific tasks to make sure they have a behavior to score.

This can make the test difficult to watch, particularly for parents. You naturally want to provide assistance and make things smoother, but the entire point of the test is to see how the child does without your assistance. Many examiners strongly discourage parents from being in the room when their child is tested, both because of the impulse to help and because parents can present a distraction.

Each module takes around 40 minutes to complete, but, because the modules are oriented at different types of subjects with different behavioral and cognitive issues, not all modules are necessarily used. However, the examiner may choose to use another module after finding that the originally selected one didn’t match the functional abilities of the child closely enough for an accurate score.

An ADOS Score is Just One Element of an ASD Diagnosis

Typically, the test will be recorded on video so a team can review it and make the diagnosis. This helps eliminate otherwise subjective biases that are inherent in any individual clinician’s work.

The behaviors of the test subject are given a score of between zero and three, weighed against the normal behavior of a neurotypical person taking the test. Zero indicates a normal behavior while three indicates abnormal function.

The sum of the individual behavior scores is the overall score on the test module. The threshold levels for an ASD diagnosis may vary according to both module and age-level… a 13 on Module 3 might be perfectly normal for an 8-year-old, but indicate low-functioning ASD for a 19-year-old.

It’s common to look for second opinions even after getting an ADOS test score, and it’s important to note that ADOS alone should not be the sole criteria for making a diagnosis—it cannot account for stereotyped behaviors or interests or histories of developmental delays, both key DSM-5 criteria. An ADI-R screening might also be administered as a secondary test to gather more data.

ADOS is constantly being refined and studied to make it more accurate and useful. The test is on its second major revision and further studies are ongoing.