These Musicians Didn't let Autism Stand in Their Way of Fame 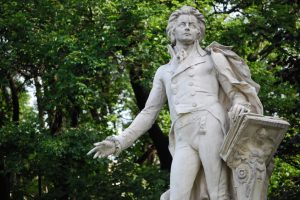 Music is life encapsulated in lyrics, melody and rhythm. We turn to it for a reflection of who we are, and use it to express everything we want to be. It can just as easily stir our emotions and move us to tears, as get us hyped up, or transport us to another time. It has the ability to make us gloriously happy and instantly inspired. For many, music serves as a respite, a source of comfort, and the best way to unwind after a long day… and the best way to get motivated to start the next one.

We instinctively move to its rhythms, tap our feet to its beats, and hum its melodies. From the moment we enter the world, music is a part of who we are.

For those with Autism Spectrum Disorder (ASD), music often becomes a voice, an outlet, and a way to relate to the world. Many adults and children with autism instantly take to music, as it allows them to explore their creativity and better navigate the world around them.

A December 2015 study published in the Journal of Autism and Developmental Disorders found a strong link between autism and divergent thinking—the ability to think creatively, out of the box. In other words, developing novel ideas and utilizing creative problem solving may come easy to those with autism.

But anyone who has had the pleasure of knowing a child or adult on the autism spectrum will likely tell you they didn’t need a study to tell them there is a clear link between autism and creative thinking. Some on the spectrum are particularly imaginative, innovative, and inspired, so it only makes sense that a number have gone to achieve superstardom.

You either got it or you don’t, and being on the spectrum isn’t the deciding factor. We set out to find some of the talented musicians who have risen to the height of fame in the industry, in spite of their autism – or maybe thanks to it. The five that made our list have turned the notion of what it means to have a ‘disorder’ on its head.

Guitarist, Singer, and Songwriter of Days of the New

“I am Travis Meeks. I am an artist. I am a Maestro of my craft. I am a human being. I am a lot of things. I am a recovering addict. I have Asperger’s Syndrome. I am a good person. I do get angry and aggravated, I am human, but I work on things every day. I live a life of both light and dark and finding the balance between those two… and that reflects in my music and art.”

Travis Meeks, guitarist, singer, and song writer, most famous for his work with Days of the New, always said he found peace listening to his favorite music: Nine Inch Nails, Pantera, Guns ‘n Roses, just to name a few.

Born in 1979 in Jeffersonville, Indiana, Travis described himself as an introvert who struggled to make friends. But he found solace—and inspiration—in music.

But like many children with autism, the path wasn’t without challenges for Travis. His childhood consisted of misdiagnosis after misdiagnosis (ADD, bi-polar, paranoia disorder, just to name a few), until he was eventually diagnosed with Asperger’s Syndrome in 2005. The misdiagnoses, unnecessary medications, and a near-constant sense of inadequacy led to extreme shame and a feeling that he couldn’t do anything right. Behavioral problems at school persisted, and experimentation with, and addiction to, drugs followed.

The grunge scene in the early 1990s proved to be an inspiration, and his first single with Days of the New, “Touch, Peel, and Stand,” quickly caught on and was in rotation on MTV and earned a spot on the Billboard charts for a record 17 weeks. The band’s first album sold more than one and a half million copies and a year later, they earned a spot on Metallica’s summer tour.

Though he admittedly continues to struggle maintaining relationships and navigating the world around him, he’s always honest about his challenges, saying, “Part of what I do is to liberate myself through being honest about my struggles.”

The AutistiX is an indie band hailing from the U.K. that does wicked covers and original music. They have a unique sound, sort of a bizarre form of experimental rock. Heavy guitar riffs and inspiration from pioneering bands like Nirvana, The Clash, and The Rolling Stones are the underpinnings of their classic garage sound.

But the AutistiX aren’t your typical London “The” band. You see, three of their members— Jack Beaven Duggan, Luke Steels, and Saul Zur-Szpiro—all have autism. Jim Connelly is their lead singer and mentor, and two of the bandmates’ fathers manage the band. Since forming in 2010, The AutistiX has completed an international tour and for the past four years even performed at Beatles Day in Hastings, England.

The boys of AutistiX certainly weren’t lacking when it came to talent, but they sure had difficulties developing relationships and making friends. This made the prospects for actually cliquing with other musicians and joining a band feel like something that was completely out of reach. Instead, they DIY’ed it and created their own band, drilling a creative outlet straight through a wall of poor social skills.

It’s always good to have a gimmick, and if you’re going to be in an autistic concept band, you’d better own it. As the name would suggest, AutistiX doesn’t keep autism in the shadows; instead, they bring it to the forefront, talking openly about it and weaving it into their songs. According to the band’s website, “We [are] keen to be recognized for our musical talent and are proud to include musicians with autism.”

But they aren’t looking for sympathy. Instead, they want to entertain and inspire as they continue to shatter stereotypes about autism.

Marty Balin, founder of Jefferson Airplane, has enjoyed a long career in music. His childhood fascination with the arts—namely, painting and acting—soon forayed into music. His interest in the San Francisco music scene in the 1960s sparked his love of music, and he released his first two singles in 1962. His musical styling ranged from folk to psychedelic rock to punk, and his band, Jefferson Airplane, went on to experience huge commercial successes, including their 1967 second album, Surrealistic Pillow, which went gold.

What many didn’t know was that Marty was diagnosed as autistic when he was a child. While he never came out and spoke in-depth about his autism diagnosis, he mentioned that he struggled as a child with autism and that it affected him into adulthood.

Drawing from his fame, Marty has since given his time to a number of projects directed at autism. He introduced a documentary by Triple Knot Productions that highlighted three families living with autism, and he has hosted several autism-awareness benefit concerts. Marty continues to write songs and perform.

While many remember James Durbin as a finalist in the tenth season of American Idol, many more also remember him for his raw honesty about pursuing his dream while living with autism.

His openness about his autism spectrum diagnosis gave this developmental disorder an international voice, letting millions of his fans know that autism is not a disability and that having autism is like having an “extra sprinkle of genius.”

James received his autism diagnosis at the age of 10, right around the time he got a hand-me-down guitar. He said playing the guitar was like therapy, helping him focus. According to James, “Music is like medicine.” He also credited his mom with providing a great deal of support throughout his childhood. “She made sure that I had great outlets and she got a godsend when she discovered I loved music, art and theater.”

According to James, his first single, “Parachute” is about both relationships and living with autism, referring to it as a mantra about the need to push through challenges and get rid of negativity so you can be your best person. He donated a portion of the proceeds from his 2014 album, Celebrate, to Autism Speaks.

James is still pursuing his music interests, and is currently the lead singer of Quiet Riot.

Arguably the most prolific composer of the classical period, Amadeus Mozart composed more than 600 works, including operas, concertos, and symphonies. The span of his work is remarkable, but what’s even more impressive is that he began exploring his craft at the tender age of four. His parents noted he had a unique ability to learn and remember music. It was said he could learn a piece of music in just a half hour at this age. By the age of six, he began composing, and by the age of eight, he was writing symphonies.

Mozart was a child prodigy, to say the least, possessing a perfect musical memory and an almost god-given ability to read music. His hearing was so delicate that loud sounds would make him physically ill – a telltale indicator of autism spectrum disorder.

But among these gifts, Mozart was said to display a number of unusual social behaviors. While, of course, autism spectrum disorder was unheard of at the time, many of his behaviors would be dead giveaways now.

He struggled with impulse control and often engaged in dangerous behavior. As Mozart’s sister, Nannerl, put it: “Never, until he died, did he learn to exercise the most elementary forms of self‐control.”

Even his compositions may have indicated difficulties with attention, and many of his musical phrases mirrored his fixation with word repetition. Other reported behaviors included repeated facial expressions, repetitive body motions, and fixations on new things that caught his fancy.

Despite these challenges, it is “Symphony No. 40, 1st Movement ‘Allegro’” and hundreds others that are his legacy, confirming what those who struggle with autism and the people who love them already know: Autism doesn’t define who they are and does not limit what they can achieve.