Why is ASD Frequently Associated with Anxiety and Depression? 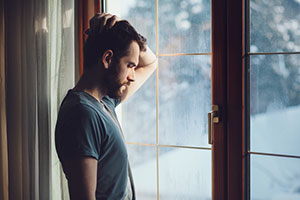 Psychologists have known for years that there is a significant degree of overlap between ASD and mood disorders. In fact, around two-thirds of autism patients are also diagnosed with one or more other psychiatric disorders. Although they have been studying the issue, there’s no clear indication of causation. One 2013 study has suggested a genetic link between ASD and a variety of other psychiatric disorders, however.

On the one hand, it may be only natural to feel anxious and depressed when you have an incurable disorder like autism that deeply affects your daily life. On the other hand, it can seem like injustice piled on top of unfairness to have to deal with both ASD and severe depression or anxiety at the same time.

It can be difficult to diagnose psychiatric issues in ASD patients both due to overlapping symptoms and because of the chronic communication issues that often accompany the disorder. For example, the preference for solitude and the strong reactions to sensory stimulation that many ASD patients exhibit are also common symptoms of depression in neurotypical individuals. But these symptoms may actually be the baseline for the autistic individual, and not necessarily indicative of a depressive mind state.

Some experts believe that depression and anxiety are over-diagnosed among autistic patients for exactly these reasons. Others, however, point out that the conditions may also be perfectly normal responses—it might be only natural and reasonable, for instance, for anxiety to be elevated in a child with ASD who has real reasons to fear being bullied at school. Some evidence that high-functioning autistics experience both anxiety and depression at elevated rates tends to back this up. The very fact that they are more cognizant of their inability to fit into society makes them more likely to worry about the consequences.

But combating anxiety and depression are real challenges for applied behavior analysts and others who work with ASD patients. From a behavioral perspective, ABAs don’t necessarily need to understand the underlying disorder causing the symptoms. In fact, the observations they make and their approach to treatment is likely to be similar no matter whether depression or ASD is behind the behavioral issues.

Apart from medications, many of the most effective treatments for anxiety and depression revolve around one of the areas ASD patients struggle with the most: communication.

Cognitive behavioral therapy (CBT) is the most effective non-chemical treatment for depression, but the inherent challenge in using it with ASD patients is immediately clear when using the other common name for that method of treatment: talk therapy.

If there is one thing that ASD patients aren’t likely to immediately take to and benefit from, it’s probably a therapeutic approach that’s focused solely on talking!

This leaves antidepressant medications (ADMs) as the most effective immediate alternative for treatment. But, as anybody who has ever seen a TV commercial for an antidepressant knows, these medications come with a long list of scary warnings and potential side effects – everything from nausea, dizziness and diarrhea to drowsiness, restlessness and agitation, to serious long-term consequences like dependency and unusual effects on child and adolescent brain development.

There is also the possibility that the best antidepressant medications options may be contraindicated by other medications being taken for ASD issues.

On the other hand, some medications with antidepressant effects are prescribed to ASD patients to deal with other autism symptoms; Zoloft, for instance, is commonly prescribed to combat obsessive-compulsive issues but also serves as an antidepressant.

It also turns out that applied behavior analysis can be one of the most effective treatments for both conditions. A 2008 meta-study examining the use of ABA in treating individuals with both anxiety and autism found that the technique was effective in dealing with anxiety symptoms as well as pure ASD-related issues. In particular, the techniques of contingent reinforcement and graduated exposure were found to be effective in dealing with anxiety.

Although ABA is also routinely used to treat depression even in neurotypical patients, there are no conclusive studies on how effective the therapy is in cases of comorbidity with ASD.

But since behavioral issues may result from either disorder, and since ABAs are more concerned with helping clients learn to thrive despite their disorder than trying to figure out the root cause, their focus is always on finding solutions that will help clients feel more happy, confident and content in their daily lives.