What is Graduated Exposure? 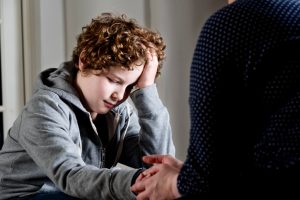 Tony was ten years old when his Aunt Karen came to visit and sneezed in front of him.

Tony had been diagnosed with autism spectrum disorder (ASD) at a young age and had the usual array of communication, social, and behavioral issues that come with ASD. One of his behavioral issues was quirky even for ASD, however: he had an extreme aversion to being anywhere near anyone with a cold.

Aunt Karen’s cold made him go ballistic. Thereafter, at any time it was suggested she visit or that he attend a family gathering where she might be, Tony would become destructive and aggressive, throwing tantrums and refusing to be present. The family felt enormous discomfort and distress over what seemed, to everyone else, like it should be a minor issue.

Therapists suggested a program of graduated exposure therapy to help mend this difficult rift. They designed a 15-step hierarchy, combined with relaxation techniques, that started with instructing him to think and talk about Karen, moved to watching videos of her and speaking to her on the phone (mediated by the therapist at first, then directly) and ended, after eight weeks, with Karen once again visiting Tony at home.

Easing Tony back into contact with his aunt was a form of graduated exposure therapy. His success in that program could just be one step in an even larger program to reduce or remove his phobia of people with colds entirely.

Exposure therapy is one of the many forms of applied behavior analysis (ABA) that most people don’t even realize is related to ABA.

Exposure therapy aims to encourage or diminish behaviors that come in response to certain situations by repeatedly and consistently demonstrating benign or even beneficial consequences.

Graduated exposure is the process of exposing the patient slowly and methodically to more and more raw aspects of those experiences. This helps build up and reinforce the lack of dire consequences that the person is usually imagining. It stands in contrast to flooding, another type of exposure therapy, which instantly and overwhelmingly introduces those experiences to numb the reactions rapidly.

You may be familiar with exposure therapy through its common use to reduce or remove irrational phobias. A person who has a massive, debilitating fear of spiders, or arachnophobia, for instance, might start by talking about spiders with the therapist at first. Then, the therapist might show them pictures of spiders, at first for only brief moments, then for longer and longer periods. Then they might observe a real spider, in a jar or something on the far side of the room, and then out of the jar, but still further away. Eventually, the patient might actually touch a spider or allow one to crawl on them… their fear of spiders having been extinguished by those repeated experiences in which none of their fears were realized.

This is also called systematic desensitization, and it was pioneered by a South African psychiatrist named Joseph Wolpe who was working with soldiers experiencing post-traumatic stress disorder.

The basis for the therapy is pretty easy to understand—every morning you get in a car and drive to work, and you don’t usually think about the terrible consequences of getting in an accident on the freeway. That’s because it almost never happens… the odds are low.

The same is true of plane crashes and spider bites (even lower odds, in fact!) but for people who have those phobias, the negative consequences are all they can imagine. And because they intentionally avoid those things, there’s no real experience to draw on to counteract those frightening perceptions.

As happened in Tony’s case, in many systems of graduated exposure therapy this exposure does not happen alone. Instead, patients are coached in relaxation or coping techniques at the same time, helping them to deal with each step of the therapy as it happens. Frequently, cognitive behavior therapy (CBT) is conducted at the same time as graduated exposure, attacking the issues from two different directions simultaneously.

Although most of us are familiar with graduated exposure through its uses in diminishing phobias or discomfort, the technique can also be used to build up and expand behaviors. For example, children with autism sometimes have extremely limited preferences for different types of food—an expression of ASD’s repetitive behaviors and sensory issues. This can make feeding them together with family and peers a considerable challenge, not to mention leading to vitamin deficiencies and other nutritional issues.

Graduated exposure takes time to work but it is also well understood and allows therapists to make deep and lasting changes in behaviors.