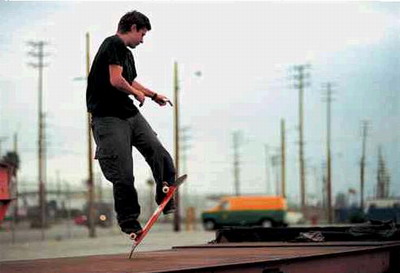 Packs of groms and teenagers across the world ripping through the suburbs and city streets on skateboards get to enjoy the freedom that comes with wheels years before they are allowed to drive.

And as everybody knows, the most fundamental part of skating – the very thing that allows you to effortlessly transition from street to sidewalk or avoid getting hung up on a sewer cap – is the flat ground ollie, a trick a Florida teenager named Rodney Mullen is credited with inventing over 30 years ago.

Although it’s only one of more than thirty tricks he is credited with creating (not to mention the hundreds of tricks that he’s modified and made his own), the ollie is the one that completely changed the face of skateboarding and made Mullen into a living legend.

For decades, he’s consistently dominated every freestyle competition he’s ever entered, brought something bizarrely serene to his part in every skate vid he’s ever been in, and, of course, has been inducted into the Skateboard Hall of Fame.

Mullen is widely credited with building the foundation that modern street skating was built on.

And interestingly, he may also be autistic.

Mullen was born with metatarsus varus, better known as pigeon toes, a condition causing both feet to point inward. In a sport where the ability to manipulate the board freely with both feet is everything, this was a significant drawback. But Mullen wore boots designed to correct the condition and practiced obsessively to perfect his technique on the board.

That obsession with skating and creating made Mullen a legend, but it might also be one indication that he has a mild form of autism.

Although never formally diagnosed, Mullen came of age in the late 1970s, before the disorder was commonly recognized—particularly in kids who were high-functioning.

Mullen himself has mentioned that he believes he may be autistic. The single-minded focus and the almost ethereal aptitude he has shown for skateboarding over the years would tend to bear that out. Autistic savants commonly exhibit similar drive and focus and are compelled through some mysterious inner process to practice their chosen craft incessantly, combining native raw talent with experience and expertise far in excess of what neurotypical people can accomplish.

Other skaters suggest that what allowed Mullen to make his breakthroughs in freestyle skateboarding was a fundamentally different way of looking at the board. In a 2015 Wired magazine article, Stacy Peralta is quoted as saying, “Everyone else looked at a skateboard and said, ‘OK, so you ride on the deck. Rodney looked at it and saw a three-dimensional object. You didn’t necessarily need to ride on the deck—you could turn it upside down and skate on it, you could skate on the edge of it.”

This ability to deconstruct the rules of the game, to look at a convention from outside the box, is common in autistic savants. Their unique brain structure does not lead them to the same assumptions as neurotypical people, even very intelligent ones.

Mullen also showed other common traits associated with ASD. He was shy and so prone to anxiety that he sometimes ran away from the team he was a member of, only to show up hours later after skating by himself.

Rodney Mullen Shows Classic Signs of Being an Autistic Savant

Skateboarding wasn’t Mullen’s only obsession. As a child, he used Erector sets to build a complete control center for his room, which used pulleys and strings to allow him to turn on the lights and open the door from the upper bunk of his bed. Mullen would become so involved in his Erector creations that his parents would have to bring his dinner to him on a tray in the evening or he would forget to eat.

And like many other autistics, Mullen has a family history that suggests links to the syndrome: his mother is also a savant, having graduated high school at age 14 and then earned a degree in physics, while also being an accomplished pianist.

Today, Mullen is in high demand on the lecture circuit and in Silicon Valley, where his creative approach to all manner of obstacles is valued. Although he has no IT background, Mullen is a polymath, quick to pick up mechanical and technological concepts; he has a patent for a new type of skateboard truck designed to provide a smoother ride. Selling the company he created to market the design made him a multimillionaire.

Like many high-functioning autistics, it appears that Mullen has been able to overcome many of his autistic tendencies over the years to behave and react more closely to the way a neurotypical person might. But his mind has clearly lost none of the unusual capacity he has shown for taking new and innovative approaches to skating, and just about everything else he does.