What is Theory of Mind and How Does it Relate to Autism? 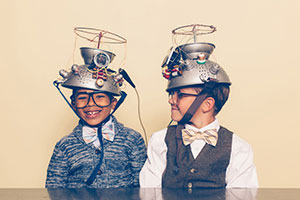 Imagine a short skit, on a bare stage with only three props and two actors: Sally, with a basket, and Anne, with a box. There’s also a marble; Sally picks up the marble and puts it in her basket. Then she leaves the stage.

While Sally is away, Anne reaches over and takes the marble out of Sally’s basket and places it in the box instead. After a moment, Sally comes back on stage.

The curtain falls. You, in the audience, are asked a simple question: where will Sally look for her marble?

For the neurotypical 99 percent of the population, even children as young as 3 years old, the answer seems obvious: Sally will look in the last place she knew the marble to be, her basket. Even chimpanzees and orangutans have been shown to anticipate this outcome. In our heads, we imagine that we know what Sally knows, from our observations of her situation and our own understanding of how the mind operates.

But among that one percent of the population that has autism, the logic is different. Around 80 percent of that 1 percent will point to the box. In their minds, the model of what Sally knows and how her mind would operate is not distinct from their own knowledge and thoughts.

This inability to construct a theory of mind (ToM) for Sally may underly some of the behaviors and symptoms that characterize ASD.

Discussion of theory of mind gets deep into the philosophical spaghetti of consciousness and reality. It refers to our ability to infer what others are thinking or feeling. Using our own experiences as a guide, we effectively construct a simulation of what may be happening in someone else’s head as we imagine what information they are receiving and how it is processed through what we know or guess about their own experiences.

When we do that, what we are doing in our own minds in that process is constructing a theory about what is happening in their mind and acting on that basis. Their reactions are a test of the theory, telling us how poor or accurate our assumptions are.

In fact, humans often extend the same courtesy to plants, animals, or inanimate objects… we anthropomorphize them to assume motivations and thoughts they probably aren’t actually having or are even capable of having.

But many people with autism spectrum disorder (ASD) appear unable to build this mental model of other minds. They cannot imagine a brain that is not their own, one that does not have the same information, one with different motivations, other feelings, other abilities. They are profoundly unable to ever put themselves into someone else’s shoes, and therefore unable to feel empathy or sometimes even communicate effectively.

Although most of us take for granted the idea that other people have the same general mental equipment and the same ability to perceive, reason, and feel just as we do, philosophers as far back as Descartes realized that the process was not really a simple one. Without direct access to the minds of others, our brains have no choice but to perform complex inferences. Even without us being consciously aware of it, the brain constantly works by itself to test assumptions and make adjustments.

All the same, the typically innate ability to form a theory of mind about other people is an important part of what makes humans social creatures, able to function in a shared culture. As a species, we are remarkably good at it.

Some scientists even believe that language only evolved because of our ability to construct a theory of mind.

All of these capabilities, notably, are the same ones that individuals with ASD have the most difficulty with. They are late to develop speech and communication skills, unlikely to exhibit empathy, and often unable to even play games with others. Their social skills often remain stunted or nonexistent through most of their lives.

Although a number of observational brain studies have suggested that certain areas of the brain are not being activated in those with ASD who cannot easily form a theory of mind, the connection between ToM and ASD has not resulted in any practical direct treatment for the condition or definitive information about the roots of the disorder. At present, it simply offers another avenue for investigation into the mysterious causes and mechanisms of ASD.

On the treatment front, however, linking ToM issues with ASD provides some basis for the use of applied behavior analysis (ABA) to deal with behavioral matters stemming from social or communication deficits. The use of ABA in perspective training is common today; just as verbal and other skills can be built and trained through behavioral reinforcement, many therapists believe that theory of mind can also be trained in individuals with ASD.

The fact that ABA therapy has been shown to improve social behavior among those with ASD is an encouraging sign that this may be true. Although it may never be possible for some individuals with ASD to truly construct a ToM in the way that most people do, from a functional perspective, they may be able to learn how to perform similar behaviors… a kind of simulation that may be just as effective as the processes behind the theory of mind in neurotypical individuals.