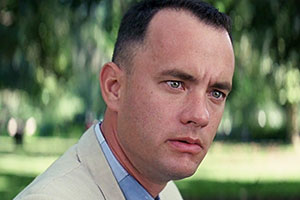 “GUMP! What’s your sole purpose in this army?”
“To do whatever you tell me, drill sergeant!”
“Goddamn it, Gump! You’re a goddamn genius! This is the most outstanding answer I have ever heard. You must have a goddamn I.Q. of 160. You are goddamn gifted, Private Gump.”

To most people, the scene between the Army drill instructor and recruit Forrest Gump in the eponymous movie is just another in a series of amusing incidents in which Gump finds himself.

But it’s also one of many signs scattered through the movie that the character might be autistic.

Neither author Winston Groom nor star Tom Hanks or director Robert Zemeckis have ever commented on their view of whether or not Forrest was intended to be portrayed as autistic. Indeed, at the time Groom published the novel, in 1986, autism was still poorly understood and not widely recognized by most people. It would have been extraordinary if Groom had created the character with autism in mind and all evidence points to the idea that he simply intended Forrest to be a low-IQ individual stumbling through some of recent history’s most historic events.

But one thing about art and literature is that it is constantly up for reappraisal and interpretation by audience and critics. For many families and professionals (such as applied behavior analysts) who regularly work with individuals on the autism spectrum, Gump’s behaviors strike a chord of recognition.

In fact, two Japanese doctors have started down that path, perhaps tongue in cheek, and made an official diagnosis of Gump according to the DSM-IV autistic disorder criteria, ruling out possible alternative diagnoses such as Rett’s disorder or childhood disintegrative disorder according to observational evidence provided in the novel.

Genius Is As Genius Does

Gump goes through life as a bit of an inept bumbler, oblivious to social signals and norms, but possessed of an ability to focus in on technical details and follow clear instructions with laser-like precision. Watching him field strip and reassemble an M-14 battle rifle in the barracks is a lot like watching an autistic savant construct castles out of Legos—precision and speed flowing from pure dedication to the task.

And folks with a military background and a sharp eye who noticed the decorations on Gump’s Class A uniform later in the film would note that he’d taken that dedication even further: he wears an Expert Rifleman Qualification Badge, the highest marksmanship badge available in the Army.

So it’s not altogether clear that Gump is stupid; as his mother is fond of telling him, stupid is as stupid does, and Gump manages to do plenty of things that aren’t so stupid, just focused and intense. His focus on running his shrimp boat shows commitment and perseverance, but though others interpret it as sheer stupidity, his method pays off in the end.

Placed in an environment with clear-cut rules and systems, Gump excels. When told that the key to success in playing ping pong is to never take his eye off the ball, there is not a second of playing time where he does so. Moreover, his practicing is obsessive, both with other players and on his own, for hours and hours… enough to eventually take him to China to compete for the United States in ping-pong diplomacy.

Applied behavior analysts (ABAs) who work with autistic patients have seen this sort of focus before and they may well have made the same use of it as Gump’s drill instructor and ping pong teachers did.

They’ve also seen plenty of ASD patients who have a kind of nervous energy, a kind of hyperactivity and repetitive motor movements that ABAs try to redirect into healthier behaviors… running, for instance, just as Forrest famously does.

The ability to channel the obsessive behaviors into positive actions is something that Forrest’s mother has in common with ABAs. Her lesson to Forrest, urging him to embrace life and accept that “you never know what you’re gonna get” is a good one for all providers working with ASD patients to remember.