Will Having Autistic Students in My Kid’s Class Impact Their Learning? 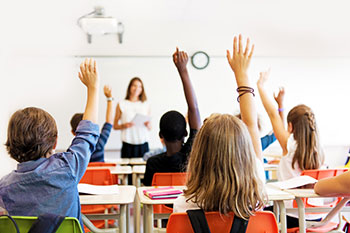 The day their daughter came home crying was the day Robert and Sara Soncini learned there was a problem in her second grade classroom in Las Vegas.

Every parent of a 7-year-old learns to roll with the crying jags and the hurt feelings that come from fitting into a sometimes unruly classroom environment. But something about this episode was different, as the Soncinis would soon learn.

As a special needs student, the school district was required under the 1990 Individuals with Disabilities Education Act (IDEA) to put the boy in the least restrictive environment (LRE) available to serve his educational needs. But to the Soncinis, if that meant the needs of the rest of the class were not being met, there was a problem.

After meeting with the school district and finding no mutual solution, the Soncinis took the unusual step of filing for a restraining order against the boy in Clark County Superior Court. The motion had the desired effect: the school district removed the boy from the classroom.

The Soncinis situation was the realization of a nightmare for many parents of children enrolled in inclusive general education classrooms along with students with behavioral issues… but fortunately it is an extremely uncommon one.

The IDEA mandate for equal educational opportunity in the least restrictive environment requires that school districts do their best to accommodate disabled students in the same environments as their abled counterparts. The idea that an equitable education could be provided in a special, separate environment was rejected.

But many parents of non-disabled students have perfectly reasonable questions about the potential disruption of having autistic students in their child’s classroom. After all, social skills—the basic mechanics of sitting and listening, cooperating and co-learning—are exactly the skills impacted by ASD. And although most parents are understanding and supportive of equal education for ASD students, they also want to protect the opportunities available to their own children.

However, other researchers have found that inclusion is generally beneficial to even neurotypical students in some unexpected ways. Social cognition skills have been found to improve when disabled learners are included in classroom environments, and a surprising number of non-disabled students gained self-esteem as part of the process. In one case, for example, a girl assigned to help tutor a disabled student in her class found her own grades improving—by helping him, she was also helping herself.

Unsurprisingly, stories like that of the Soncinis and that of the tutor who found her own performance improving in an inclusive classroom can largely be distinguished by the level of support and methods of integrating ASD students into general education classrooms.

Applied behavior analysts (ABAs) are often key team members responsible for making inclusive classrooms run properly. By working with students, teachers, and administrators, they can devise behavioral strategies to help integrate classes in a way that helps ensure the success of all students. Their understanding of the antecedents and resulting behaviors from ASD students, as well as techniques for modifying them, can be taught and shared to make inclusion a group effort.

With applied behavior analysis being the only scientifically proven treatment for autism, schools have been scrambling to find qualified ABAs to either train or serve as co-teachers in inclusive classrooms. Co-teachers can provide support to regular general education teachers as well as direct intervention for autistic students. They can also help devise techniques and accommodations particular to the curriculum and the class, tailoring responses to the challenges faced.

In other environments, ABAs are used to intervene periodically in a general education class when an autistic student is being disruptive. There are a variety of approaches being explored in different school districts and the right solution can be a function of the staff, students, and resources involved—there is no magic bullet.

But parents of both autistic and non-disabled students have all learned that in the right environment, inclusive classrooms can be good for everyone’s kids.