Can the Discovery of Gravity Be Attributed to Newton’s Supposed Autism? 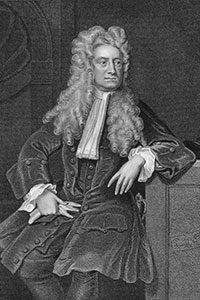 No one has ever argued that Isaac Newton was normal.

While still an undergraduate student at Cambridge, Newton carefully slid a blunt needle into his eye socket and leveraged it against the back of the sclera, distorting the shape of the lens and creating patterns in his vision that he systematically recorded in a notebook. Although jabbing a needle in ones eye is the act of a madman, there was method behind Newton’s apparent madness: he understood that his own observations of optics and the behavior of light depended on the fidelity of the instruments he relied on. Those included his own eyes as much as the prisms and lenses he ground from glass.

The logic of testing himself in this way is unassailable but at the same time deeply disturbing and unusual.

But parents of children with autism, particularly those with high-functioning autism, see this sort of application of logic over social mores and graces all the time.

Was Newton’s genius tied to autism?

The workings of Newton’s mind were a marvel and a mystery to contemporaries and remain so even three hundred years later. His observations and analysis broke open the underpinnings of our modern understanding of math and physics. His theory of gravitation, famously set off after musing on apples falling from a tree, completely revolutionized human cosmology.

How was it that he was able to concentrate so fully and think so clearly about gravity and other matters of math and physics? Apples have been dropping on people from trees since the dawn of time. All of the givens that Newton observed could have led to a theory of gravitation at almost any point in human history. What was it about his mind that perceived them differently?

These autistic savants have many similarities to eccentric geniuses throughout history: obsessive interests, poor social skills, difficulty communicating with neurotypical individuals. These are all hallmarks of autism, and records of Newton seem to show that he, too, possessed some of them.

Newton was known for his peevishness and lack of social graces. As anyone who lives or works with someone on the high-functioning end of the spectrum has seen first hand, this sort of obliviousness to the feelings of others and lack of consideration of social niceties is entirely typical of people with ASD.

Newton also certainly showed hints of the obsessive in his nature. Famously, he compiled a detailed list of all sins he committed prior to Whitsunday 1662, a miserly 48 entries that today provides an incomparable glimpse into the heart and life of an otherwise mythic figure.

Yet those 48 sins also provide some grounds to doubt Newton’s obsessiveness and ASD-like symptoms. Even as a young man, when traits of autism are notably stronger, he had time to engage in water fights on the sabbath and play pranks on neighbors and classmates. His interests appear more diverse than his later obsessions would suggest; reading a book on Christian champions, baking pies, swimming, and other hobbies show a more typical childhood than many on the autism spectrum enjoy.

And he was apparently social enough to engage in politicking sufficient to become elected to Parliament, a post he attained in 1689, and later Warden and Master of the Royal Mint. Analysis of his hair after his death showed signs of mercury poisoning, a not unusual affliction for scientists of the era. This could also have induced many of the same symptoms that are attributed to autism.

It may be unimportant to known definitively whether or not we owe our understanding of gravity to an individual with ASD. The more important point is to understand that individuals with ASD can be capable of great things despite their lack of social graces or difficulties in communicating. Whether he had ASD or not, it’s easy to imagine that Newton’s crabbiness and odd behavior came from being surrounded by people who simply could not think like he could think—a position that most individuals with ASD are in whether they are geniuses or not.