What is a Functional Behavior Assessment? 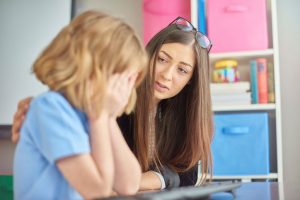 Victoria was in the third grade when her teacher noticed a problem when it was time for the children to gather into reading groups. While the other kids would calmly go to their assigned places, Victoria would become agitated and start hitting her classmates. When she could finally be convinced to take her place in the group, it always seemed that she managed to forget to bring her materials with her. Returning to her desk to collect things, she would fumble through her stuff and scatter it across the floor, causing even more disruption.

In the old days, the teacher would have chucked a piece of chalk at Victoria every time this happened and that would have probably been the extent of it. Today, behavioral interventions are slightly more systematic: they start with a functional behavior assessment (FBA) to get at the root of disruptive behaviors and provide a solid basis for building an effective behavior intervention plan (BIP).

By observing each of Victoria’s behaviors and analyzing them together with the environment and the outcome, it soon became obvious to the teacher that she was acting out in order to avoid going to her reading group. Probing even further, the teacher was able to determine that Victoria was nervous about having to read out load—her behavior was designed to avoid the nerve-wracking experience of having all eyes in the room trained on her.

It was until her teacher finally figured all this out that she could start giving Victoria the help she needed. The exact time and purpose of the reading groups would be explained to her ahead of time… she would be required to be the first student to get up and move to the meeting place, so that she would have no opportunity to hit anyone along the way. Nothing would start without her being prepared. Further, positive reinforcement would be given after her participation, praising her for a good job.

ABA Is Driven By Evidence and Analysis

One of the key ideas behind the science of applied behavior analysis is that it is driven by direct observation and experimentation. Actual changes in behaviors are the critical measure of any ABA therapy. And change cannot be assessed unless observations can be made of those behaviors.

Functional behavior assessments are the way applied behavior analysts develop a baseline and determine whether future interventions are actually resulting in measurable changes.

ABAs aren’t psychic—they can’t just watch a patient and know what is going one with behaviors by sheer intuition. As they perform an FBA, what they are doing is forming hypotheses about what drives certain behaviors and attempting to test them to figure out which is the correct theory.

The observations fit into three categories:

Together, these so-called ABCs of ABA provide the information required to intervene in behavioral problems.

It’s rare for an ABA to come to a patient without any existing case information available. An important part of their assessment will start with reviewing previous case history and discussing the patient’s behavior with other medical professionals, teachers, family, and caregivers. If previous interventions have occurred, the ABA will study them to gauge their effectiveness and glean any clues from the outcomes.

The FBA is not all about negative behaviors. In fact, most ABAs will seek to play to the patient’s strengths, so positive behaviors are also observed and analyzed.

The target behavior itself also has to be written down in a clear, unambiguous way, such that anyone involved with the case would be able to recognize it. This definition will be the basis of all future modifications so it’s pretty important to be clear. Saying that Johnny throws tantrums in class isn’t enough; outlining that Johnny turns over his desk and stomps on his books for several minutes when he is asked to solve a math problem is better.

The ABA conducting the assessment will also want to observe the behaviors directly, if at all possible. Their training may allow them to pick up on subtle factors in the ABCs that other observers might miss.

The observations will include information about:

The frequency of the behavior may also be important.

The Hypothesis Leads to Likely Interventions

An experienced ABA uses the functional behavior assessment to reach behind the surface behaviors and understand what the subject is trying to accomplish through them. Is the patient seeking attention? Escape? Sensory stimulation? All the various possible motivations must be analyzed and examined to determine a plan of action that can alter the behavior. If a child yells in class frequently because they are trying to get attention, it requires a different approach than if they are yelling because they are angry.

When the functional consequences of the behaviors are understood adequately, the necessary interventions often become obvious. In Victoria’s case, once it was established that her payoff was avoiding participating in the reading group, it was clear that extra steps had to be taken to ensure that she attended and to change the reinforcers for that behavior to encourage her participation rather than her avoidance.

The initial FBA is rarely the last one. The hypothesis constructed may not be the correct one. It has to be tested against the actual behaviors and further observations will need to be made. In complex or ongoing cases, it may require a series of interventions, each building on the last, to address problem behaviors. But by conducting each FBA systematically and scientifically, the ABA and other caregivers can always be sure they are making progress toward the ultimate goal.