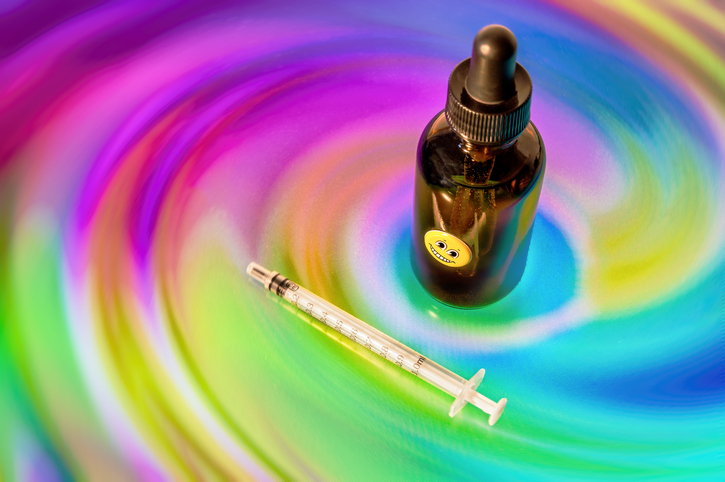 In a calm, comfortably furnished room that looks like someone’s living room, a patient with eyeshades on lays down on the couch. Sitting next to them, a professional dressed casually in street clothes hands them a small cup. Inside the cup is a pill. The patient takes the pill and the experimental treatment begins.

So far, apart from the setting (which is actually in a medical research facility), it sounds like your standard scenario for pharmacology research. But what happens next is anything but ordinary. The pill is synthesized psilocybin… the distilled chemical compound that is the active ingredient in magic mushrooms, a psychedelic favorite of the 60s.

The treatment is to simply lay there, under the effects of the drug, allowing the mind to travel along the pathways of what proponents call an expanded consciousness… a psychedelic trip. The guide does little other than to ensure the patient’s safety and set the tone for the experience. No active therapy is performed.

But this isn’t the 60s, either. It’s happening today in the Behavioral Pharmacology Research Unit at Johns Hopkins Bayview Medical Center and elsewhere, and it’s part of a very serious research effort into the operant effects of psychedelics in addiction treatments.

Tripping Along The Road To Recovery For Addicts

Typically, applied behavior analysts find themselves on the other side of the table when it comes to dealing with patients on Schedule I controlled substances like psilocybin or lysergic acid diethylamide… better known as LSD, or just acid.

But psychedelics are an unusual type of illegal drug. Far from being addictive, some researchers believe they are actually anti-addictive… a property that some researchers are exploring as a way to treat more harmful narcotics typically associated with abuse and addiction.

Socially, psychedelics have been a pariah since their popular recreational adoption by the hippie movement in the 1960s and 1970s. Consequently, some modern ABAs are surprised to learn that, prior to that recreational use, there were a number of serious research efforts into the possible medical uses of psychedelics.

In fact, the most common family of modern antidepressants, the SSRIs (Selective Serotonin Re-uptake Inhibitors), were born out of research originally sparked by investigations into the neurochemical bindings of LSD.

A number of studies using psychedelics as treatments for tobacco and alcohol addiction were performed before LSD was phased out of medical studies in 1980. Although the clinical standards of the time do not match the rigorous experimental designs of today, at least one subsequent meta-study has found reliable evidence of the effectiveness of the treatments.

Psychedelic Studies May Be A Perfect Fit For ABAs

It is unquestionably difficult to study the effects of psychedelics. For one thing, double blind studies are all but impossible… there is no possible placebo that can fool either observers or participants as to which drug was received.

It’s also inordinately common for participants to credit behavioral changes that come after treatment to spiritual journeys they experienced under the effects of the drugs. There is considerable evidence to indicate that the nature of these journeys is guided in some respects by the clinicians administering the drugs and the setting in which they are taken. Again, this makes for poor research standards.

But this may be an area where applied behavior analysis is particularly suitable for such studies. With a stringent focus on operant behaviors, an ABA can discount the supposedly spiritual mechanisms at play and focus exclusively on the effects of the drugs.

The Hopkins research does exactly this. ABAs evaluate a participant’s  post-trip drug-seeking behaviors according to a measure of delay discounting and demand curve analyses. Whether or not the patient touched the face of God along the way is, from a behavioral perspective, more or less immaterial.

This sort of rigorous examination may be exactly what is required for psychedelics to reclaim their position as a potentially useful pharmaceutical rather than a perpetual drug enforcement boogeyman.

Due to the underground nature of psychedelic use from 1980 up until recently, few legitimate scientists have been able to study its uses, and those who have certainly have not been able to publish their findings.

That has left a preponderance of amateur speculation to dominate the field. Some of the proposed uses, often advanced by users themselves, take on the flavor of snake-oil solutions. LSD, psilocybin, or even more exotic psychedelics are proposed as the solution for conditions ranging from depression to headaches. Transcendental experiences are the prescription for everyone from cancer patients to someone having a bummer day.

But a growing body of more formal evidence is making it easy to conclude that there are certainly potential treatment paths for a variety of behavioral disorders that ABAs frequently treat.

Even the BACB is getting on board, offering a lecture titled “Psychedelics: Mechanisms and Therapeutic Potential” as part of its 2018 B.F. Skinner Lecture series. Presented by Doctor Matthew Johnson, the researcher responsible for the Hopkins program and featuring a presentation by Doctor Robin Carhart-Harris, a U.K. researcher at the forefront of the psychedelic research resurgence, the program covered brain imaging studies performed with LSD, psilocybin, MDMA, and DMT (an ayahuasca, brew concocted from vines from the Amazon).

It’s far too soon to say whether or not the average ABA working in addiction treatment will be seeing prescription psychedelics as a common feature of treatment plans. But the possibility is much closer than it was only a few years ago.