What Changes Can I Expect to See in a Teenager with ASD? 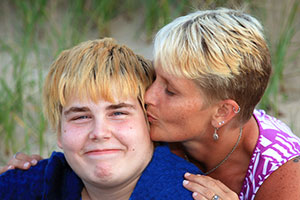 Navigating the teenage years is a minefield for any parent, but for those with children on the autism spectrum, the challenge is even greater. Just when the parent of an autistic child thinks they’ve figured out how to manage their child’s individual behaviors and symptoms, it all changes again. Unfortunately for all parents there is no manual available on how to successfully make it through the teenage years. Every child is different and this is just as true for those with Autism Spectrum Disorder (ASD).

Because adolescents with autism typically cling to routines, consistency and orderliness, the extensive changes that come about during the middle and high school years can be especially difficult to maneuver. Parents can help guide their children through this time by understanding what changes they may expect as their child progresses through these years.

How Will Bodily Changes Affect My Teen?

Many children with autism live introverted lives and fail to observe the changes occurring in their peers. This is a common issue associated with being unable to pick up on social cues, something that comes more naturally to neurotypical teens eager to fit in and desperate to avoid anything that could cause embarrassment.

An autistic teen may not notice that the boys in his class have begun shaving and wearing deodorant because he just isn’t that interested in what his peers are doing and doesn’t have the same apparent drive to belong. While other teens will likely start tossing razors and Old Spice into the shopping cart when you’re at the drug store, your autistic teen will likely need more guidance and a thorough explanation.

Females will have their own issues to contend with including shaving legs and armpits in addition to learning to use menstruation products and wearing a bra. None of which is likely to come very easy to a teen with autism.

Remember too that if your teen suffers from sensory issues, these new grooming rituals may cause additional anxiety. The appearance of the hair itself in these new areas can be a source of distress for a child, add in the need to learn to use a razor and your teen can become quite anxious about all these changes and new routines.

The best way to prepare your teen to adapt to these changes is to begin the conversation early on. Many experts believe that you should start to have these talks with your child as early as age nine. Talk to them consistently about the changes that are coming to help alleviate the stress when they do. Also, include them in the decisions when the time comes. Take them to the store to pick out their own hygiene products. This allows them to find the right options for their specific sensory needs.

Are Seizures Normal for Autistic Teens?

One of the scariest changes that parents with kids on the spectrum may encounter during the teen years is the onset of seizures. This is thought to be a byproduct of the hormonal changes brought on by puberty. Current research shows that while approximately one in four individuals with autism suffer with seizures during puberty, most go completely unnoticed since they’re so minor.

These small seizures are referred to as subclinical seizures and may include the following symptoms:

Even though most teens with autism won’t experience seizures during puberty, it’s a good idea for parents to request an EEG (electroencephalogram) to detect if any seizure activity has occurred.

Why is Depression Prevalent in Autistic Teens?

Depression may become increasingly common in your teenager because they may be noticing their differences for the first time. The social hierarchy in middle and high school is much more decisive than during the elementary school years, which may make your teen feel even more like an outsider. Not to mention that the new pressures of more complex and varied class projects and assignments can add to the anxiety they feel and could eventually lead to depression.

One way to combat depression is to consistently speak with your child about their feelings and try to draw out the root of the problem. If the depression becomes observable and acute, don’t try to take it on alone. Use the resources available to you to get professional help.

How Will My Teen Adjust to New Social Norms?

As your child enters their teen years, their social isolation may become more prominent. One study showed that social withdrawal got even worse with age for a significant portion of subjects with ASD between ages 9 and 18, and that IQ level was not a factor.

This isolation comes for many reasons. First, as your child matures, the playdates that may have once been the crux of their social lives no longer exist. This leaves your teen treading the social waters on their own for what is likely the first time, leaving them feeling even more lost and alone than before.

Keep in mind that social withdrawal isn’t always a choice. The teenage years represent a whole new world for a young adult on the spectrum – new school, different routines, more classmates. They likely spent the better part of their younger years paying little attention to their peers, but now they may be noticing the social groups around them but are clueless about how to fit in. The anxiety from these new challenges can lead to disruptive behavior in the classroom and in the home.

Parents can help with this social transition by encouraging their child to join a club or find an afterschool activity that forces them into social situations. It’s also a good idea to discuss current teen trends so they understand what’s going on in pop culture, if only to make sure they can grab on to a common interest that will allow them to better relate to their peers. This will help give them the confidence they need to join in conversations and to start participating a little more in the social scene. You don’t want them to miss this opportunity – it comes only once in a lifetime, and almost everybody would agree that making a connection with friends is the best thing about being a teenager.